History of Arbovirus Research in the Czech Republic

Reassortant variant viruses generated between 2009 H1N1 pandemic influenza virus [A(H1N1)pdm09] and endemic swine influenza viruses posed a potential risk to humans. Surprisingly, genetic analysis showed that almost all of these variant viruses contained the M segment from A(H1N1)pdm09, which originated from Eurasian avian-like swine influenza viruses. Studies have shown that the A(H1N1)pdm09 M gene is critical for the transmissibility and pathogenicity of the variant viruses. However, the M gene encodes two proteins, M1 and M2, and which of those plays a more important role in virus pathogenicity remains unknown. In this study, the M1 and M2 genes of A(H1N1)pdm09 were replaced with those of endemic H3N2 swine influenza virus, respectively. The chimeric viruses were rescued and evaluated in vitro and in mice. Both M1 and M2 of H3N2 affected the virus replication in vitro. In mice, the introduction of H3N2 M1 attenuated the chimeric virus, where all the mice survived from the infection, compared with the wild type virus that caused 100 % mortality. However, the chimeric virus containing H3N2 M2 was still virulent to mice, and caused 16.6% mortality, as well as similar body weight loss to the wild type virus infected group. Compared with the wild type virus, the chimeric virus containing H3N2 M1 induced lower levels of inflammatory cytokines and higher levels of anti-inflammatory cytokines, whereas the chimeric virus containing H3N2 M2 induced substantial pro-inflammatory responses, but higher levels of anti-inflammatory cytokines. The study demonstrated that Eurasian avian-like M1 played a more important role than M2 in the pathogenicity of A(H1N1)pdm09 in mice. View Full-Text
Keywords: influenza; pathogenicity; 2009 H1N1 pandemic; M1; M2; Eurasian avian-like influenza; pathogenicity; 2009 H1N1 pandemic; M1; M2; Eurasian avian-like
►▼ Show Figures 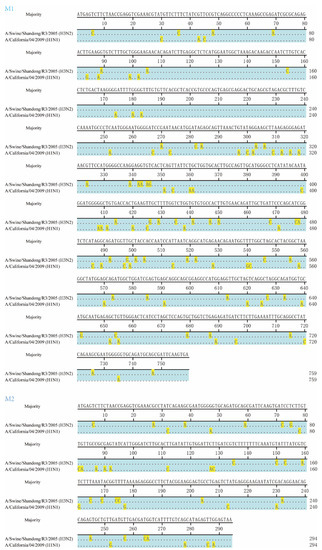