Epidemiology and Genetic Variability of HHV-8/KSHV among Rural Populations and Kaposi’s Sarcoma Patients in Gabon, Central Africa. Review of the Geographical Distribution of HHV-8 K1 Genotypes in Africa
Previous Article in Journal

Intra-Host Diversity of SARS-Cov-2 Should Not Be Neglected: Case of the State of Victoria, Australia

Since the identification of severe acute respiratory syndrome coronavirus 2 (SARS-CoV-2) as the etiological agent of the current COVID-19 pandemic, a rapid and massive effort has been made to obtain the genomic sequences of this virus to monitor (in near real time) the phylodynamic and diversity of this new pathogen. However, less attention has been given to the assessment of intra-host diversity. RNA viruses such as SARS-CoV-2 inhabit the host as a population of variants called quasispecies. We studied the quasispecies diversity in four of the main SARS-CoV-2 genes (ORF1a, ORF1b, S and N genes), using a dataset consisting of 210 next-generation sequencing (NGS) samples collected between January and early April of 2020 in the State of Victoria, Australia. We found evidence of quasispecies diversity in 68% of the samples, 76% of which was nonsynonymous variants with a higher density in the spike (S) glycoprotein and ORF1a genes. About one-third of the nonsynonymous intra-host variants were shared among the samples, suggesting host-to-host transmission. Quasispecies diversity changed over time. Phylogenetic analysis showed that some of the intra-host single-nucleotide variants (iSNVs) were restricted to specific lineages, highlighting their potential importance in the epidemiology of this virus. A greater effort must be made to determine the magnitude of the genetic bottleneck during transmission and the epidemiological and/or evolutionary factors that may play a role in the changes in the diversity of quasispecies over time. View Full-Text
Keywords: SARS-CoV-2; quasispecies; nonsynonymous iSNVs; transmission; phylogenetic; genetic bottleneck SARS-CoV-2; quasispecies; nonsynonymous iSNVs; transmission; phylogenetic; genetic bottleneck
►▼ Show Figures 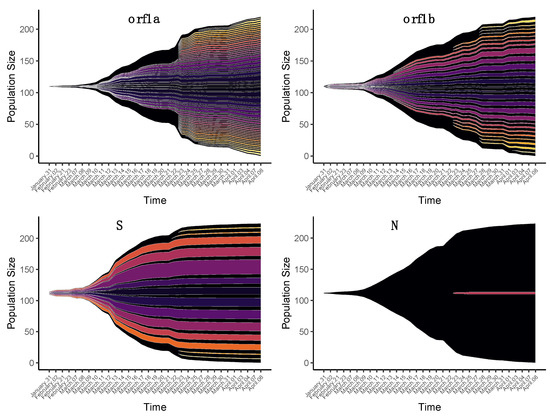