Tospoviruses cause significant losses to a wide range of agronomic and horticultural crops worldwide. The type member, Tomato spotted wilt tospovirus (TSWV), causes systemic infection in susceptible tomato cultivars, whereas its infection is localized in cultivars carrying the Sw-5 resistance gene. The response to TSWV infection in tomato cultivars with or without Sw-5 was determined at the virus small RNA level in the locally infected leaf. Predicted reads were aligned to TSWV reference sequences. The TSWV genome was found to be differentially processed among each of the three-viral genomic RNAs—Large (L), Medium (M) and Small (S)—in the Sw-5(+) compared to Sw-5(−) genotypes. In the Sw-5(+) cultivar, the L RNA had the highest number of viral small-interfering RNAs (vsiRNAs), whereas in the Sw-5(−) cultivar the number was higher in the S RNA. Among the three-viral genomic RNAs, the distribution of hotspots showed a higher number of reads per million reads of vsiRNAs of 21 and 22 nt class at the 5′ and 3′ ends of the L and the S RNAs, with less coverage in the M RNA. In the Sw-5(−) cultivar, the nature of the 5′ nucleotide-end in the siRNAs varied significantly; reads with 5′-adenine-end were most abundant in the mock control, whereas cytosine and uracil were more abundant in the infected plants. No such differences were seen in case of the resistant genotype. Findings provided insights into the response of tomato cultivars to TSWV infection. View Full-Text
Keywords: tospoviruses; Tomato spotted wilt tospovirus (TSWV), viral-small-interfering RNAs (vsiRNAs), Sw-5(+) and Sw-5(−), tomato; deep sequencing tospoviruses; Tomato spotted wilt tospovirus (TSWV), viral-small-interfering RNAs (vsiRNAs), Sw-5(+) and Sw-5(−), tomato; deep sequencing
►▼ Show Figures 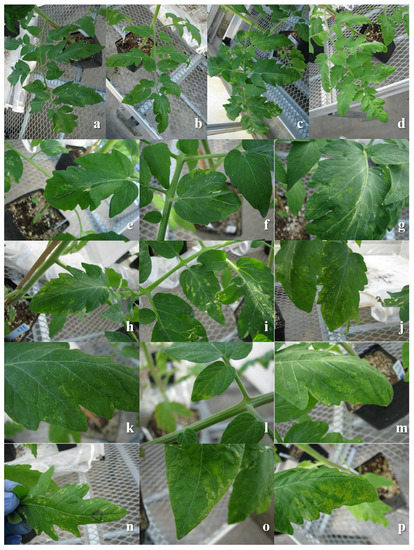