A Diverse Virome of Leafroll-Infected Grapevine Unveiled by dsRNA Sequencing

Quebec is the third-largest wine grape producing province in Canada, and the industry is constantly expanding. Traditionally, 90% of the grapevine cultivars grown in Quebec were winter hardy and largely dominated by interspecific hybrid Vitis sp. cultivars. Over the years, the winter protection techniques adopted by growers and climate changes have offered an opportunity to establish V. vinifera L. cultivars (e.g., Pinot noir). We characterized the virome of leafroll-infected interspecific hybrid cultivar and compared it to the virome of V. vinifera cultivar to support and facilitate the transition of the industry. A dsRNA sequencing method was used to sequence symptomatic and asymptomatic grapevine leaves of different cultivars. The results suggested a complex virome in terms of composition, abundance, richness, and phylogenetic diversity. Three viruses, grapevine Rupestris stem pitting-associated virus, grapevine leafroll-associated virus (GLRaV) 3 and 2 and hop stunt viroid (HSVd) largely dominated the virome. However, their presence and abundance varied among grapevine cultivars. The symptomless grapevine cultivar Vidal was frequently infected by multiple virus and viroid species and different strains of the same virus, including GLRaV-3 and 2. Our data show that viruses and viroids associated with the highest number of grapevines expressing symptoms included HSVd, GLRaV-3 and GLRaV-2, in gradient order. However, co-occurrence analysis revealed that the presence of GLRaV species was randomly associated with the development of virus-like symptoms. These findings and their implications for grapevine leafroll disease management are discussed. View Full-Text
Keywords: grapevine leafroll disease; viromics; dsRNA extraction; virus epidemiology; virus co-occurrence; Vitis vinifera; interspecific hybrid grapevine leafroll disease; viromics; dsRNA extraction; virus epidemiology; virus co-occurrence; Vitis vinifera; interspecific hybrid
►▼ Show Figures 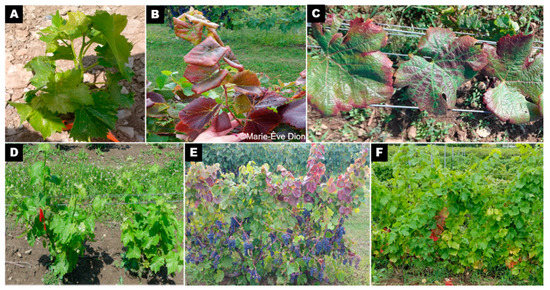