Besides noroviruses, the Caliciviridae family comprises four other accepted genera: Sapovirus, Lagovirus, Vesivirus, and Nebovirus. There are six new genera proposed: Recovirus, Valovirus, Bavovirus, Nacovirus, Minovirus, and Salovirus. All Caliciviridae have closely related genome structures, but are genetically and antigenically highly diverse and infect a wide range of mammalian host species including humans. Recombination in nature is not infrequent for most of the Caliciviridae, contributing to their diversity. Sapovirus infections cause diarrhoea in pigs, humans and other mammalian hosts. Lagovirus infections cause systemic haemorrhagic disease in rabbits and hares, and vesivirus infections lead to lung disease in cats, vesicular disease in swine, and exanthema and diseases of the reproductive system in large sea mammals. Neboviruses are an enteric pathogen of cattle, differing from bovine norovirus. At present, only a few selected caliciviruses can be propagated in cell culture (permanent cell lines or enteroids), and for most of the cultivatable caliciviruses helper virus-free, plasmid only-based reverse genetics systems have been established. The replication cycles of the caliciviruses are similar as far as they have been explored: viruses interact with a multitude of cell surface attachment factors (glycans) and co-receptors (proteins) for adsorption and penetration, use cellular membranes for the formation of replication complexes and have developed mechanisms to circumvent innate immune responses. Vaccines have been developed against lagoviruses and vesiviruses, and are under development against human noroviruses. View Full-Text
Keywords: Bavovirus; Lagovirus; Nebovirus; Norovirus; Recovirus; Sapovirus; Valovirus; Vesivirus; enteroids; reverse genetics; animal models Bavovirus; Lagovirus; Nebovirus; Norovirus; Recovirus; Sapovirus; Valovirus; Vesivirus; enteroids; reverse genetics; animal models
►▼ Show Figures 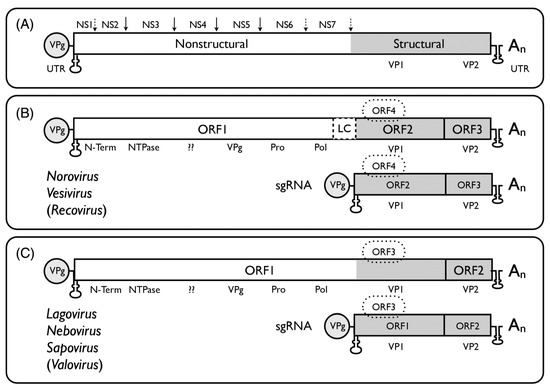