Xenotropic Mouse Gammaretroviruses Isolated from Pre-Leukemic Tissues Include a Recombinant

Naturally-occurring lymphomagenesis is induced by mouse leukemia viruses (MLVs) carried as endogenous retroviruses (ERVs). Replicating the ecotropic MLVs recombines with polytropic (P-ERVs) and xenotropic ERVs (X-ERVs) to generate pathogenic viruses with an altered host range. While most recovered nonecotropic recombinants have a polytropic host range, the X-MLVs are also present in the pre-leukemic tissues. We analyzed two such isolates from the AKR mice to identify their ERV progenitors and to look for evidence of recombination. AKR40 resembles the active X-ERV Bxv1, while AKR6 has a Bxv1-like backbone with substitutions that alter the long terminal repeat (LTR) enhancer and the envelope (env). AKR6 has a modified xenotropic host range, and its Env residue changes all lie outside of the domain that governs the receptor choice. The AKR6 segment spanning the two substitutions, but not the entire AKR6 env-LTR, exists as an ERV, termed Xmv67, in AKR, but not in the C57BL/6 mice. This suggests that AKR6 is the product of one, not two, recombination events. Xmv67 originated in the Asian mice. These data indicate that the recombinant X-MLVs that can be generated during lymphomagenesis, describe a novel X-ERV subtype found in the AKR genome, but not in the C57BL/6 reference genome, and identify residues in the envelope C-terminus that may influence the host range. View Full-Text
Keywords: recombinant retrovirus; xenotropic gammaretrovirus; endogenous retroviruses; retroviral origins recombinant retrovirus; xenotropic gammaretrovirus; endogenous retroviruses; retroviral origins
►▼ Show Figures 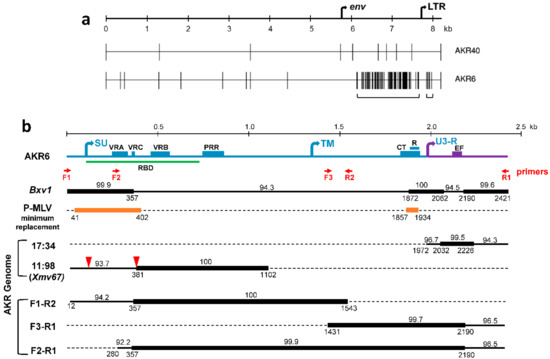