There Is Always Another Way! Cytomegalovirus’ Multifaceted Dissemination Schemes
Previous Article in Journal

Porcine respiratory disease is a multifactorial disease that can be influenced by a number of different microorganisms, as well as by non-infectious factors such as the management and environment of the animals. It is generally believed that the interaction between different infectious agents plays an important role in regard to respiratory diseases. Therefore, we used high-throughput sequencing combined with viral metagenomics to characterise the viral community of tonsil samples from pigs coming from a conventional herd with lesions in the respiratory tract at slaughter. In parallel, samples from specific pathogen-free pigs were also analysed. This study showed a variable co-infection rate in the different pigs. The differences were not seen at the group level but in individual pigs. Some viruses such as adenoviruses and certain picornaviruses could be found in most pigs, while others such as different parvoviruses and anelloviruses were only identified in a few pigs. In addition, the complete coding region of porcine parvovirus 7 was obtained, as were the complete genomes of two teschoviruses. The results from this study will aid in elucidating which viruses are circulating in both healthy pigs and in pigs associated with respiratory illness. This knowledge is needed for future investigations into the role of viral-viral interactions in relation to disease development. View Full-Text
Keywords: viral metagenomics; pigs; respiratory disease; specific pathogen-free pigs viral metagenomics; pigs; respiratory disease; specific pathogen-free pigs
►▼ Show Figures 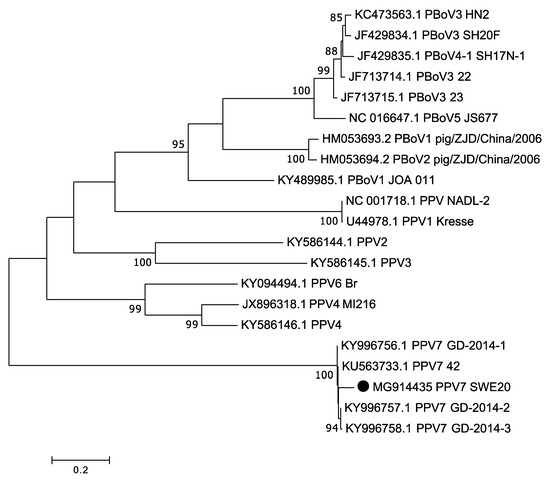 
Blomström, Anne-Lie; Ye, Xingyu; Fossum, Caroline; Wallgren, Per; Berg, Mikael. 2018. "Characterisation of the Virome of Tonsils from Conventional Pigs and from Specific Pathogen-Free Pigs." Viruses 10, no. 7: 382.