Tropical forests and savanna (cerrado) are important carbon (C) sinks; however, few data exist for seasonally flooded forests. We quantified the annual rates of aboveground net primary production (ANPP) over a five-year period for two forests, an upland mixed forest and a seasonally flooded cerrado forest, located in the northern Pantanal region of Brazil. We hypothesized that rates of ANPP would be higher for the mixed forest than the cerrado forest because seasonal flooding can limit rates of tree growth. ANPP was calculated as the sum of the annual litter production measured from litterfall traps and the stem growth increment measured from dendrometers and tree density. ANPP varied between 3.8–5.5 MgC ha−1 y−1 for the flooded forest and 1.6–4.6 MgC ha−1 y−1 for the upland forest. Litter production accounted for 57% of the ANPP, and the difference in ANPP between the upland and flooded forests was due to consistently higher litter production in the flooded forest. Annual variations in ANPP were not correlated with annual precipitation, presumably because the hydrology of these sites is driven more by the flood stage of the Cuiaba River than by local precipitation. However, consistent declines in forest floor litter mass occurred at both sites, suggesting that C storage may be responding to some unknown disturbance that occurred prior to our sampling campaign. Seasonal variation in rainfall exerted an important control on litter production dynamics, with leaf litter production increasing during the dry season and stem and reproductive litter production increasing during the wet season. While there are few studies of seasonally flooded tropical forests, our data suggest that the seasonally flooded and upland forests of the northern Pantanal can act as appreciable aboveground C sinks. View Full-Text
Keywords: cerrado; climate change; litter production; net primary production; tropical forest cerrado; climate change; litter production; net primary production; tropical forest
►▼ Show Figures 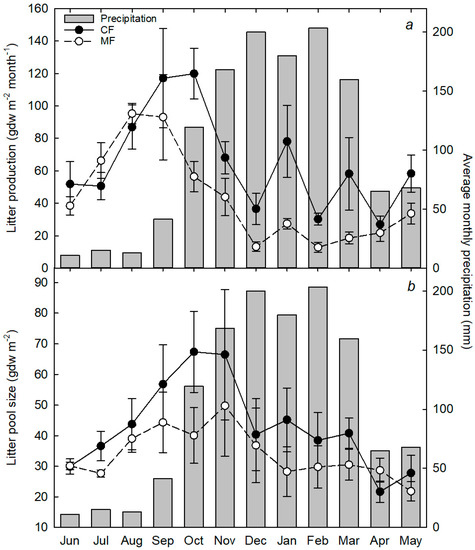