China is the largest importer of logs and lumber in the world, which accounted for $20 billion (34.9% of total global imports) by value and 109 million m3 (22.9%) by volume in 2018 [1]. China has become a wood product remanufacturing and redistribution center due to the combination of scarce domestic forest resources, low-cost manufacturing, and surging foreign demand [34]. China then consumes much of this wood domestically but also exports a large amount of wood furniture and plywood throughout the world, particularly to the European Union countries and the United States [1]. China now is playing a leadership role in the export of wood furniture and wooden panels in the world, amounting to $ 35 billion in 2018 (see Figure 1).
More than 150 countries export logs and lumber to China. New Zealand (39.6% of total imports), Russia (19.6%), and the United States (12.5%) are the three largest softwood log suppliers in 2018, and Russia (48.3% of total imports), Thailand(13.5%), Canada (9.6%) and the United States (7.8%) are largest lumber suppliers in 2018 (see Figure 2). Other countries, such as France, Germany, Brazil, Indonesia, Malaysia, Philippines, Chile, Finland, Sweden, Ukraine, Ghana, and Japan, are also major exporters to China, but with a smaller proportion. China also imports logs from some developing and tropical countries that have led to China being considered as a key consumer of illegally-sourced timber [35]. Some log exporters in these countries do not pay required royalties to the exporting nations nor do they exercise proper environmental control over harvest operations [36]. Looking specifically at China’s supply of tropical hardwood logs, African countries, the Solomon Islands and Papua New Guinea account for around 30% of China’s imports. While we would like to include these countries in this study, they do not report their exports to GTIS and we, therefore, cannot calculate a trade discrepancy within the data we have available.

Figure 3 shows a timeline of the major government policies for forest harvesting and timber trade in China and its partner countries. Regarding trade policies for timber products, China has maintained an open market and low tariffs in bilateral trade since joining the WTO in 2001, which has provided more benefits and opportunities for countries to export to China. Zero import tariffs on logs and lower value-added tax and customs duty on logs and lumber (7% on logs and 13% on lumber), combined with relatively low wages and high productivity, have created a competitive advantage for China in world forest products markets and trade [34,37]. Concurrently, China has signed bilateral free trade agreements with many forest products partner countries, which has led to the growth and expansion of China’s import and export trade and has developed mutually beneficial markets with these countries (see Figure 3). Recently, a ban on the commercial harvesting of natural forests was enacted in 2017, which has limited China’s domestic timber supply [38]. Importing more logs and lumber has enabled China to meet a rapidly growing international and domestic manufacturing and construction demand.
Many supplying countries have enacted protective trade policies and are advocates of combating illegal timber harvesting and trade. Since the G8 organization proposed the Forest Action Project in 1998, the United States, EU, and several other countries have introduced rules, laws, and regulations to combat illegal logging and timber trade. In 2008, the United States introduced an amendment to the Lacey Act, requiring that forest products, such as wood and furniture imported into the United States have proof of legal sourcing [39]. In the same year, Russia added quotas and an export tax to restrict log exports, reduce the loss of forest resources, and increase domestic processing, job creation, and revenue for the domestic forestry industry [40]. Since that time, there has been a dramatic change in Russia’s wood exports to China, with log exports declining substantially and lumber exports increasing rapidly (see Figure 2).
In 2009, the European Union adopted the Forest Law Enforcement, Governance and Trade (FLEGT) plan to reduce illegal and unsustainable logging in supplying countries [41]. Subsequently, they enacted the EU Timber Regulation and implemented Voluntary Partnership Agreements (VPAs) to achieve the goals of FLEGT. About 90% of the imported timber products in the EU market were covered by the EUTR in 2013 [42]. Supplier countries with abundant forest resources, such as Indonesia, Malaysia, Philippines, Ghana, Thailand, and Ukraine, have successively proposed bans on log exports, limiting the loss and harvesting of precious species of wood and protecting the ecological environment [43]. In addition, these countries implemented export or logging bans to create job opportunities and improve their forestry industry [41].
The Chinese government has been taking actions to combat illegal timber trade, including the promulgation of the 2010 Public Timber Harvesting and Purchase policy and the promotion of forest certification [34]. Many NGO organizations have taken steps to encourage companies to remove illegal or unsustainable timber from their supply chains. Supplying and trading corporations, both public and private, now use voluntary certification systems, such as FSC and PEFC, to identify their sustainable and legal products [36]. All the work has had a positive effect on the sustainable trade of wood products [44]. The proportion of illegally sourced timber has decreased and the proportion of certified wood products is increasing [34].

The results of existing studies may be less applicable in the recent timber markets considering the substantial changes in trade flow and trade policies, particularly after China joined in WTO in 2001. For example, as Russia raised log export tariffs in 2008, the import volume of softwood logs from Russia to China declined from 21.1 million m3 in 2007 to 9.5 million m3 in 2018 [1]. China also switched to importing softwood logs from sustainably managed plantations in New Zealand, reaching 19.2 million m3 and 39.2% of the total imports in 2018. Factors relating to trade discrepancies need to be further explored and updated. This study seeks to measure the discrepancies in timber trade statistics using a time-lagged function, and specifically considers China and its partners’ logs and lumber trade data from 2002 to 2018 as a case study based on customs data available in GTIS. The study hopes to fill a gap in the literature by attempting to isolate both the unintentional and intentional factors behind identified discrepancies and provide an account of the reasonable explanations and incentives for trade discrepancies. By doing so, this study hopes to add to our collective ability to effectively interpret, control and reduce discrepancies in the timber trade, and improve the accuracy and reliability of trade data. Accordingly, the three objectives of this study are:

3.1. Discrepancy Ratios in the Trade Statistics for Logs and Lumber

This work was supported by the China Scholarship Council (CSC, grant number 201606510048) to perform the research project by Fei Liu in CINTRAFOR at the University of Washington supervising by Indroneil Ganguly. The authors acknowledge three anonymous reviewers for constructive comments on the original manuscript. 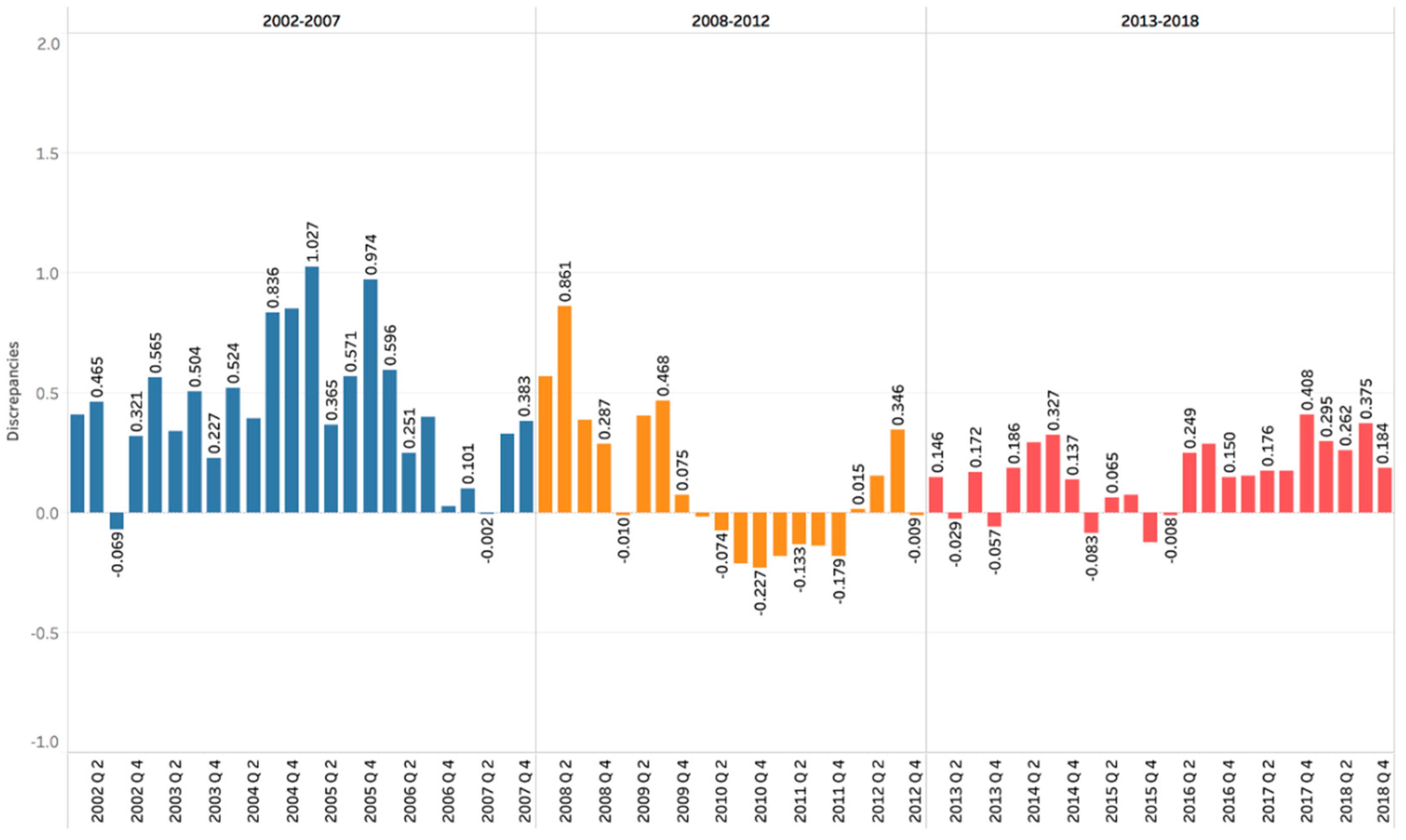 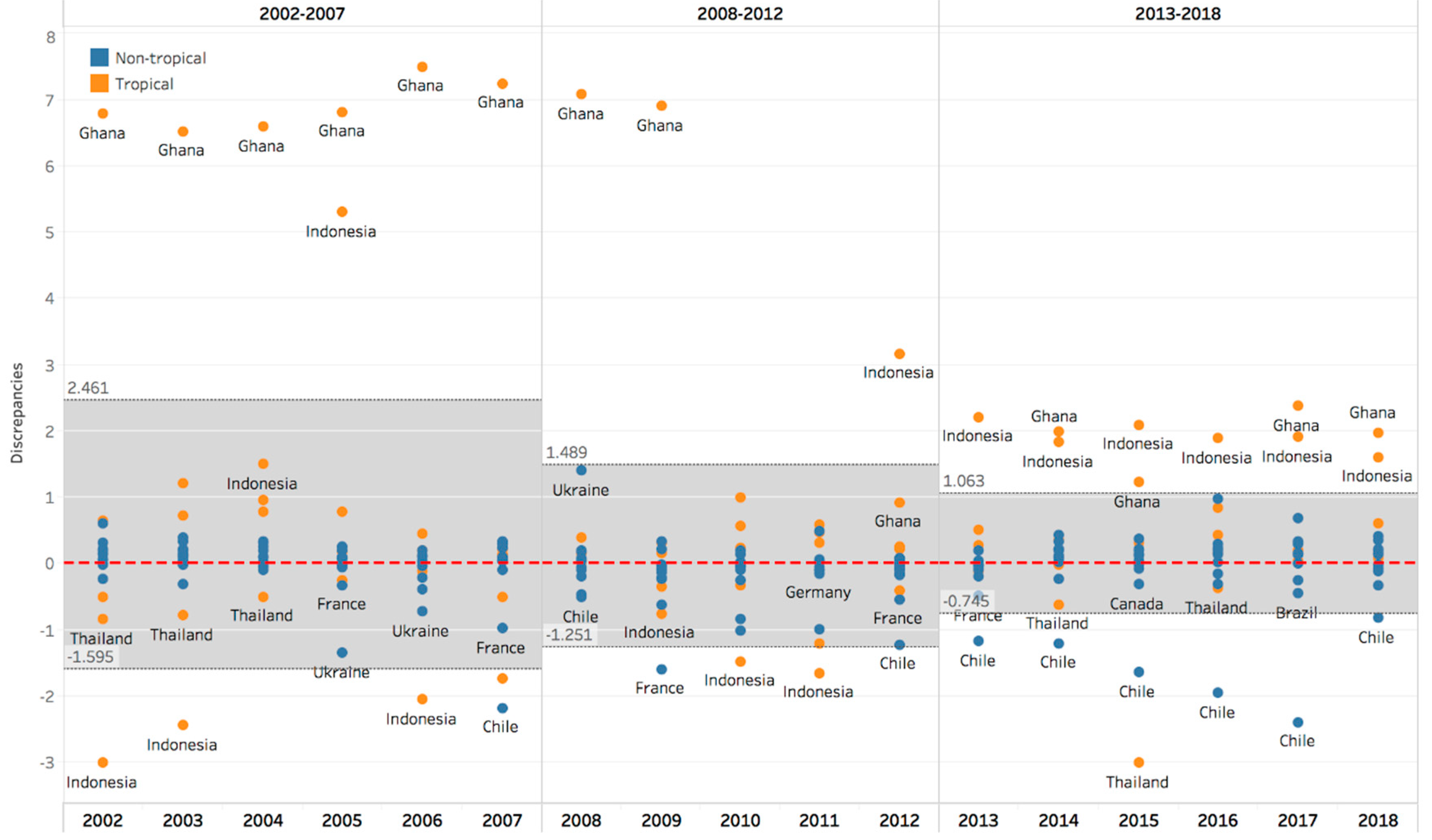 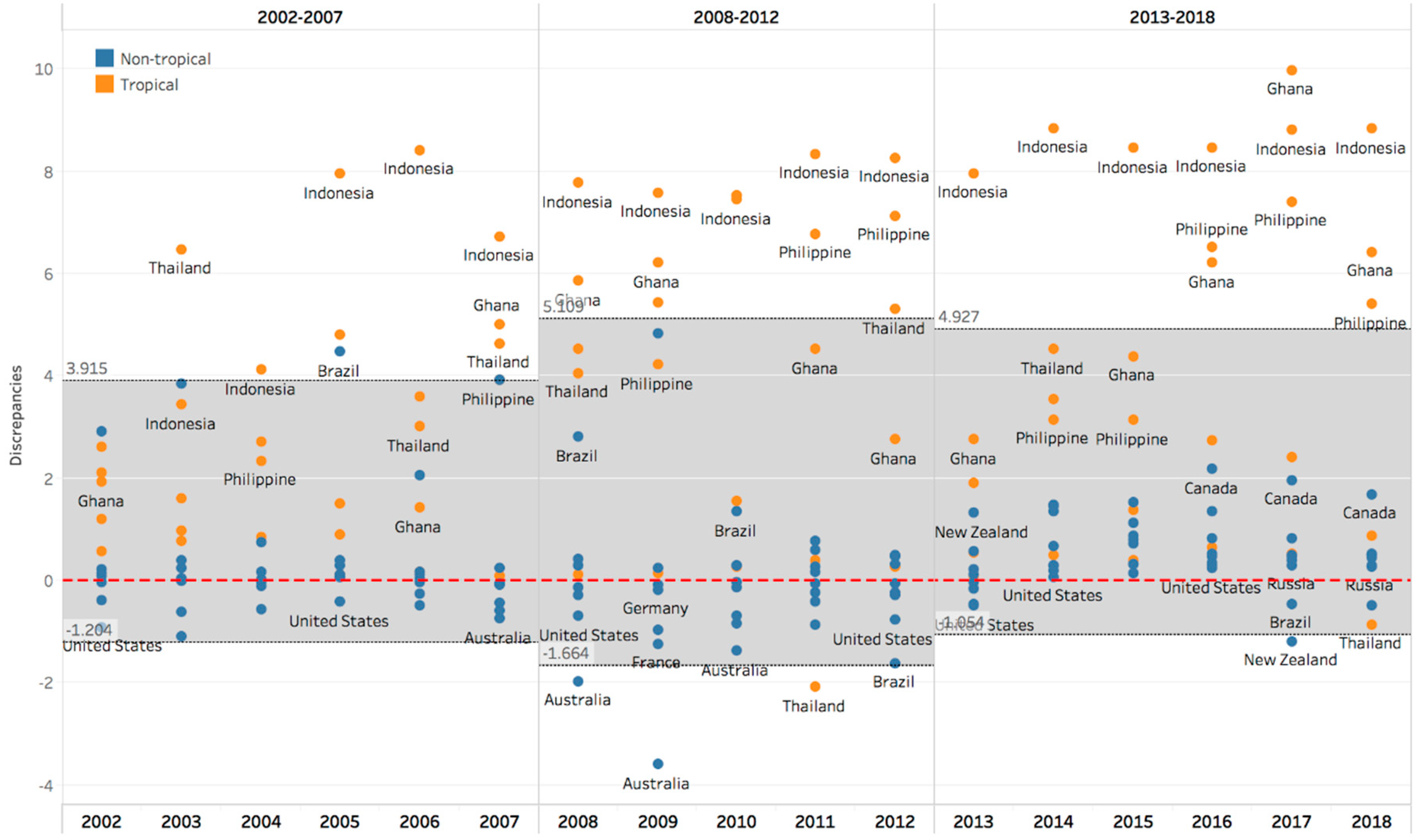