Combined Effects of Drought and Shading on Growth and Non-Structural Carbohydrates in Pinus massoniana Lamb. Seedlings
Previous Article in Journal

Spatio-Temporal Changes of Urban Forests and Planning Evolution in a Highly Dynamical Urban Area: The Case Study of Wrocław, Poland

Knowledge about urban forests in Poland is still limited, as it is primarily based on aggregate, formal data relating to the general area, ignoring the spatial dimension and informal green areas. This article describes and analyses spatio-temporal changes in the actual urban forest resources in Wrocław in 1944–2017, which covers the first period of the city’s rebuilding after its destruction during World War II and its development during the nationalised, centrally-planned socialist economy, as well as the second period of intensive and only partly controlled growth under conditions of market economy. The study is based on current and historical orthophotomaps, which were confronted with cartographic data, as well as planning documents. We found that between 1944 and 2017, the percentage contribution of informal woodlands increased tenfold (from 0.5 to 4.9% of the present total area of the city). The area occupied by such forests has grown particularly during the most recent years of the city’s intensive development. However, the forests have been increasingly fragmented. During the first period, new forest areas were also created in the immediate vicinity of the city centre, while during the second one, only in its peripheral sections. The post-war plans regarding the urban green spaces (UGS), including the current plan, are very conservative in nature. On the one hand, this means no interference with the oldest, biggest, and most valuable forest complexes, but on the other hand, insufficient consideration of the intensive built-up area expansion on former agriculture areas. Only to a limited extent did the above-mentioned plans take into account the informal woodlands, which provide an opportunity for strengthening the functional connectivity of landscape. View Full-Text
Keywords: spontaneous woodlands; urban forests; urban planning spontaneous woodlands; urban forests; urban planning
►▼ Show Figures 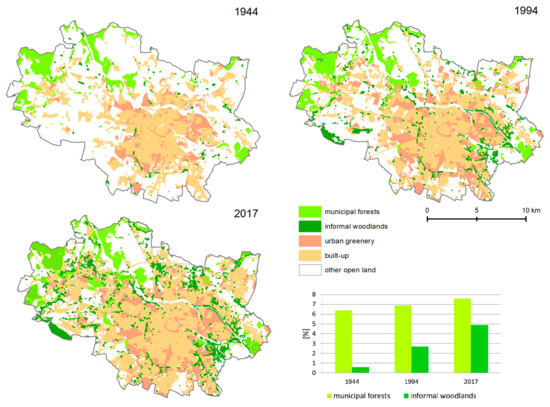