Multivariate Discriminant Analysis of Single Seed Near Infrared Spectra for Sorting Dead-Filled and Viable Seeds of Three Pine Species: Does One Model Fit All Species?

Seed lots of pine species are composed of viable, dead-filled and empty seeds, and the success of complete sorting of dead-filled seeds using the conventional method (Incubation, Drying and Separation in water) is difficult to achieve; leaving a considerable scope for upgrading the sorting efficiency. The objective of this study was to evaluate the prospect of sorting viable and dead-filled seeds of pine species using Near Infrared (NIR) spectroscopy. To demonstrate this, dead-filled and viable seeds of Mason’s pine, slash pine and loblolly pine were incubated in moist medium for three days, dried for six hours and scanned by XDS Rapid Content Analyzer from 780–2500 nm. Orthogonal Projection to Latent Structure-Discriminant Analysis was used to develop discriminant models for each species separately and for all species combined. The results showed that the sensitivity (the model’s ability to correctly classify members of a given class) and the specificity (the model’s ability to reject non-members of a given class) were 100% for each species model and 98%–99% for combined species model. The overall classification accuracy was 100% and 99% for individual species and combined species models, respectively. The absorption band in the 1870–1950 nm with a major peak at 1930 nm, which is related to water, was responsible for discrimination as dead-filled seeds dried quicker than viable seeds during the drying process. Our study is the first attempt to simultaneously discriminate dead-filled and viable seeds of pines by NIR spectroscopy. The results demonstrates that a global calibration model of seed lots of several pine species can be equally effective as the individual species model to discriminate viable and dead-filled seeds by NIR spectroscopy, thereby ensuring precision sowing (also known as single seed sowing) in nurseries. View Full-Text
Keywords: NIR; OPLS-DA; Pinus massoniana; Pinus elliottii; Pinus tabuliformis; seed sorting NIR; OPLS-DA; Pinus massoniana; Pinus elliottii; Pinus tabuliformis; seed sorting
►▼ Show Figures 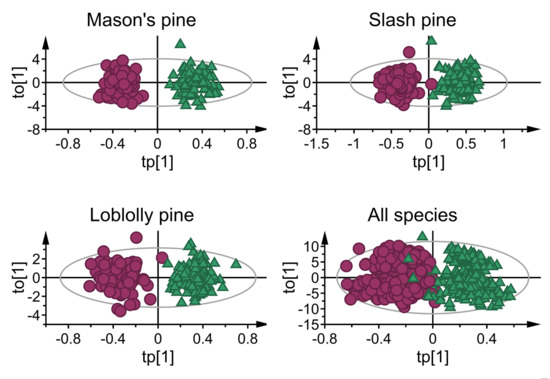