The Colour of Tropical Woods Influenced by Brown Rot

:
The deflection of a test material occurs under bending stress that is caused by force. In terms of plasticity and elasticity, the deflection can be quantified at two main areas, which are the limit of proportionality and the modulus of rupture. Both of these deflections are of great importance in terms of the scientific and practical use. These characteristics are particularly important when designing structural elements that are exposed to bending stress in terms of the size of the deflection in their practical application. This study analyzed the effect on the size of the deflection at the limit of proportionality and at the modulus of rupture. Wood species (Fagus sylvatica L. and Populus tremula L.), material thickness (6 mm, 10 mm, and 18 mm), non-wood component (glass and carbon fiber), position of the non-wood component in the layered material (up and down side with respect to the loading direction), and adhesive used to join the individual layers (polyurethane and polyvinyl acetate) were the observed factors. Glass fiber reinforcement proved to be a better option; however, the effect of correctly selected glue for individual wood species was also apparent. For the aspen laminated materials, polyurethane adhesive (PUR) adhesive was shown to be a more effective adhesive and PVAc adhesive was better for the beech-laminated materials. These results are of great importance for the production of new wood-based materials and materials were based on non-wood components, with specific properties for their intended use.
Keywords:
technological and product innovations; cyclic loading; laminated wood; deflection at the limit of proportionality; deflection at the modulus of rupture; wood-processing industry performance

The composition design and production of Laminated Veneer Lumber materials is primarily focused on the intended use of the material. Therefore, it is necessary to know the proposed composition under the influence of various factors in order to create such a material.
The basic component of LVL materials is wood component, however non-wood component can be also used. The single layers of LVL material could be modified or unmodified. The modification can be carried out in a variety of ways, such as high temperature, chemical, impregnation, pressure, microwave irradiation, lamination, etc. The possibilities of increasing the strength and the stiffness of wood lie in its combination with non-wood components at various material bases [1]. These are steel, glass, and carbon fibers in building materials [2,3,4]. Authors [5] conducted research with the effect of embedded carbon fiber fabric in the bonded joint of five-layer plywood to increase the flexural strength.
Flexibility is a technical property of wood that expresses its ability to bend. It is a material property that may be classified as either a positive or negative characteristic, depending on the purpose. In the case of materials that are intended for bending, this property is desirable [6,7,8], whereas it is undesirable in materials that are intended for construction [9,10].
Bending is defined as a torque that acts on a material perpendicular to the cross section, which results in normal and tangential stress that causes stress through bending or twisting [11]. Each change in a beam subjected to bending is the result of work that is directly dependent on the force that is used and the resulting deformation [12,13]. The range of external forces doing the work changes in bending within the maximum boundary. The internal forces that are caused by deformation are also displaced [14]. Potential energy accumulates in an elastically deformed object, and then the energy is converted into work that is consumed after release to enable the object to return to its original shape [15,16,17].
The deflection at the limit of proportionality of wood is characterized as the boundary after which deformation becomes elastic over time and plastic. It is necessary to use the force at the limit of proportionality to achieve deflection at the limit of proportionality [18]. Up to this point, the wood is loaded with a force that only causes elastic deformation and it is therefore only flexibly loaded [19,20,21]. This deflection can be achieved without any apparent permanent deformation of its size or shape. The deflection at the modulus of rupture is characterized as the deflection when the material breaks. It is necessary to use force at the modulus of rupture to achieve this deflection (Figure 1) [20,22,23].
The bending characteristics of the wood can be improved by reinforcing it with non-wood components on a different basis [1,25]. Carbon fibers, aramid fibers, basalt fibers, fiberglass, and polyvinyl alcohol (PVA), and others, are suitable non-wood components that can be used for wood reinforcement [26,27,28]. In addition to synthetic fiber reinforcement, natural fiber reinforcement may also be used, e.g., in the form of a nonwoven fabric. Experimental research has shown that correctly locating the reinforcement component has the potential to increase the bending characteristics of laminated wood in the case of application on the stressed tensile zone [21,29,30].
The literature points to the influence of surface structure on the properties of the bonded surface joint [31,32]. In view of this, the selection of a suitable adhesive for joining wood-based materials and non-wood components is very critical [33]. Wood itself is a hygroscopic material and, as such, it continually absorbs and releases moisture, which, among other things, causes a change in size. These changes can cause the adhesive to separate from the wood component. This effect can be avoided by appropriately selecting an adhesive for a specific bonded element [34].
The objective of this study was to determine the effect of the composition of laminated wood (wood species, type of non-wood component, position of the component in the structure, thickness of the material, and the type of adhesive used for bonding individual layers) on the deflection characteristics of the force-deflection diagram (deflection at the limit of proportionality and at the modulus of rupture).

For the experiment, layered beech (Fagus sylvatica L.) and aspen (Populus tremula L.) wood (Polana, Slovakia), with a non-wood reinforcing component (glass and carbon fibers), were used. The test specimens were made with three thicknesses of 6 mm, 10 mm, and 18 mm, with a lamella width of 35 mm and length of 600 mm. The test specimens were divided into 48 test groups, with respect to the thickness and species of wood component, the type of non-wood component, and the position of the non-wood component relative to the load direction. Figure 2 shows the categorization of the test specimens. The individual wood and non-wood components were glued while using two types of adhesive, which were single-component waterproof polyvinyl acetate adhesive (PVAc) (AG-COLL 8761/L D3, EOC, Oudenaarde, Belgium) and single-component polyurethane adhesive (PUR) (NEOPUR 2238R, NEOFLEX, Madrid, Spain). Table 1 lists the detailed parameters of these adhesives. The test specimens were climatized at a 12% equilibrium moisture content (EMC) in a climatic chamber (Binder ED, APT Line II, Tuttlingen, Germany) at set relative humidity (65%) and temperature values (20 °C).

The three-point bending test was performed according to the predetermined conditions. The lower support span was set to 20 times the thickness of the test specimen (this span varied, depending on the thickness of the test specimens). The bending tests were performed on a universal testing machine (FPZ 100, TIRA, Schalkau, Germany), according to [35,36,37]. To adhere to the duration limit for the test (2 min.), the top support feed rate was set to 3 mm/min. The deflections at the limit of proportionality and at the modulus of rupture were measured using an ALMEMO 2690-8 datalogger (Ahlborn GmbH, Braunschweig, Germany).
A force-deflection diagram was used to determine the limit of proportionality and the modulus of rupture. To identify all of the necessary characteristics, a program was developed for identifying data that can be obtained from the force-deflection diagram.

The authors are grateful for the support of the Advanced Research Supporting the Forestry and Wood-processing Sector’s Adaptation to Global Change and the 4th Industrial Revolution (Project No. CZ.02.1.01/0.0/0.0/16_019/0000803), financed by OP RDE. The authors are also grateful for the support of the Internal Grant Agency (IGA) of the Faculty of Forestry and Wood Sciences (Project No. B 06/17). 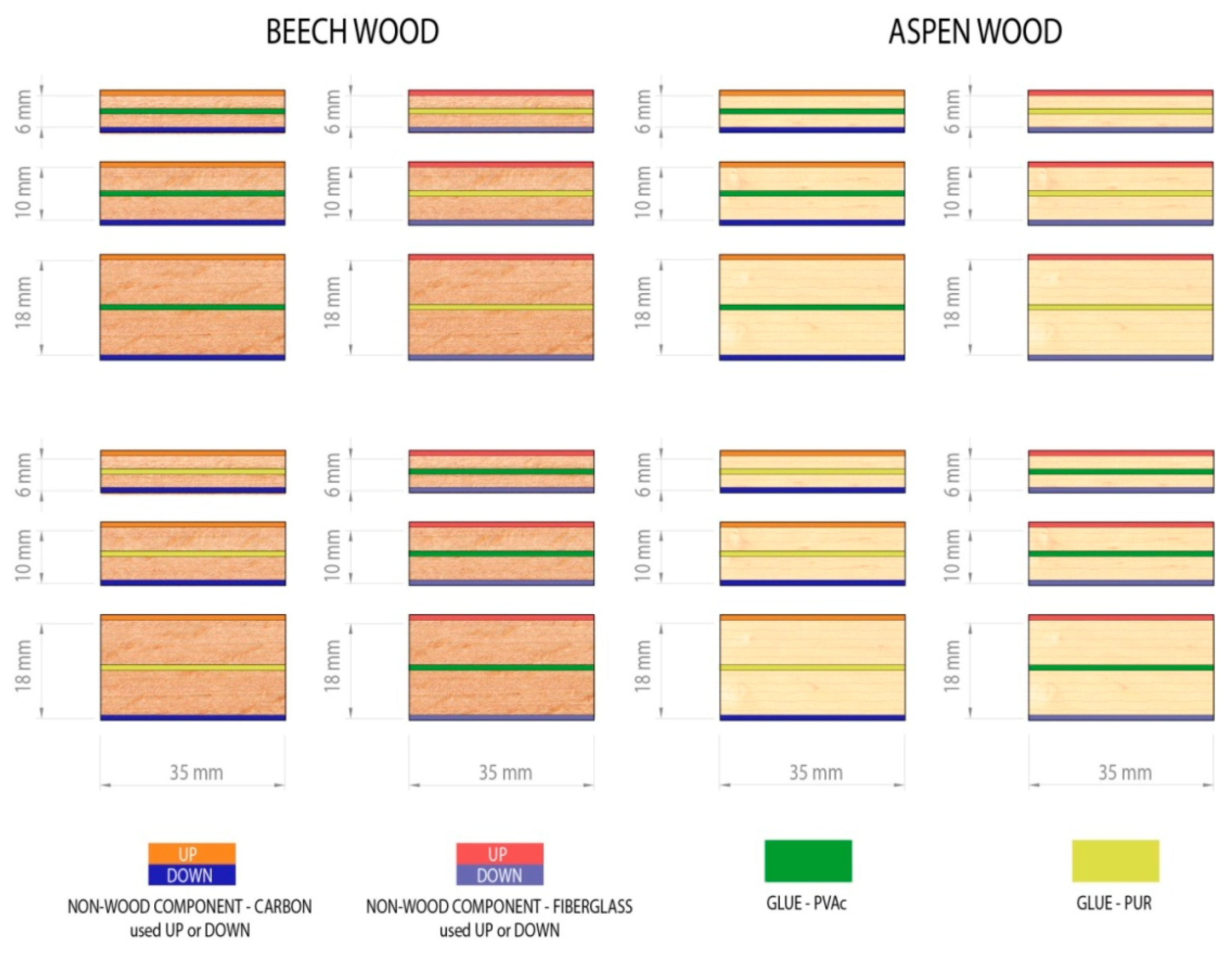 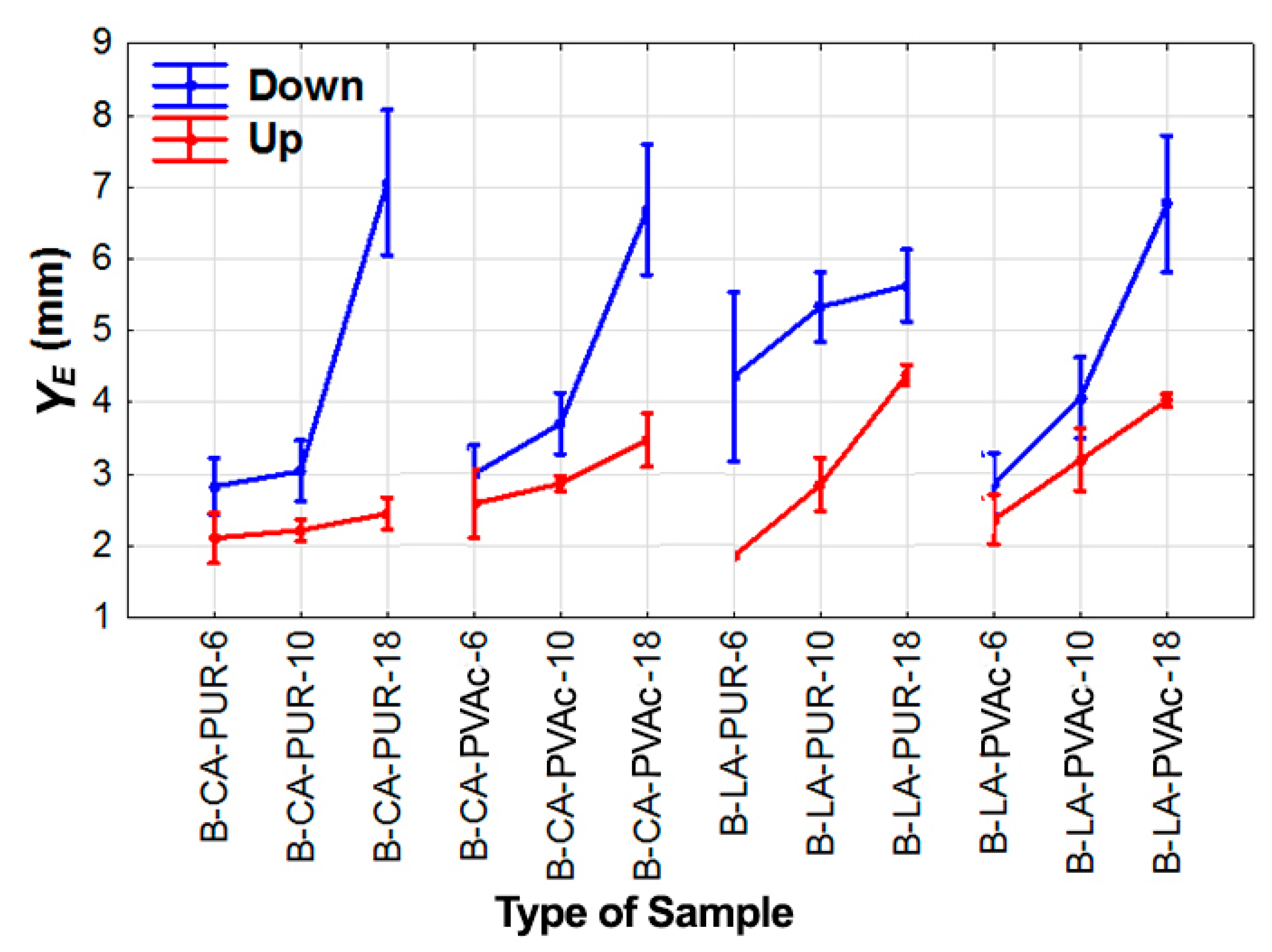 
Sikora, Adam, Tomáš Svoboda, Vladimír Záborský, and Zuzana Gaffová. 2019. "Effect of Selected Factors on the Bending Deflection at the Limit of Proportionality and at the Modulus of Rupture in Laminated Veneer Lumber" Forests 10, no. 5: 401. https://doi.org/10.3390/f10050401


Sikora, Adam, Tomáš Svoboda, Vladimír Záborský, and Zuzana Gaffová. 2019. "Effect of Selected Factors on the Bending Deflection at the Limit of Proportionality and at the Modulus of Rupture in Laminated Veneer Lumber" Forests 10, no. 5: 401. https://doi.org/10.3390/f10050401