Preliminary Investigation of the Process Capabilities of Hydroforging

This in vitro study investigated whether different storage conditions of plasma-treated zirconia specimens affect the shear bond strength of veneering porcelain. Zirconia plates were treated with a non-thermal atmospheric argon plasma (200 W, 600 s). Porcelain veneering (2.38 mm in diameter) was performed immediately (P-I) or after 24 h storage in water (P-W) or air (P-A) on the treated surfaces (n = 10). Untreated plates were used as the control. Each group was further divided into two subgroups according to the application of a ceramic liner. All veneered specimens underwent a shear bond strength (SBS) test. In the X-ray photoelectron spectroscopy (XPS) analysis, the oxygen/carbon ratios of the plasma-treated groups increased in comparison with those of the control group. When a liner was not used, the three plasma-treated groups showed significantly higher SBS values than the control group (p < 0.001), although group P-A exhibited a significantly lower value than the other two groups (p < 0.05). The liner application negatively affected bonding in groups P-I and P-W (p < 0.05). When the veneering step was delayed after plasma treatment of zirconia, storage of the specimens in water was effective in maintaining the cleaned surfaces for optimal bonding with the veneering porcelain. View Full-Text
Keywords: zirconia; veneering porcelain; bond strength; plasma treatment; storage condition zirconia; veneering porcelain; bond strength; plasma treatment; storage condition
►▼ Show Figures 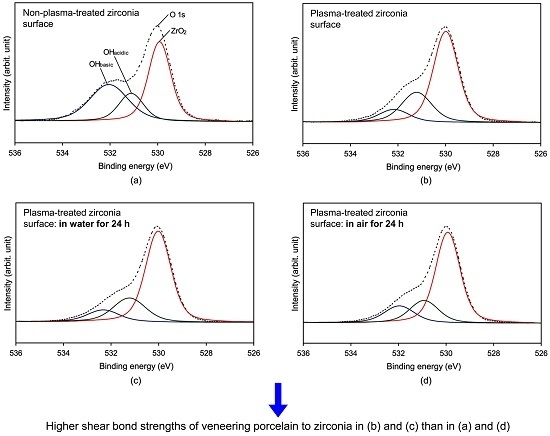