Experimental Assessment and Numerical Modeling of the Bond–Slip Correlation for Steel Rebars in r.c. Members
Previous Article in Journal

Waste tire disposal continues to pose a threat to the environment due to its non-biodegradable nature. Therefore, some means of managing waste tires include grinding them to crumb rubber (CR) sizes and using them as a partial replacement to fine aggregate in concrete. However, the use of CR has a series of advantages, but its major disadvantage is strength reduction. This leads to the utilization of calcium carbide waste (CCW) to mitigate the negative effect of CR in self-compacting concrete (SCC). This study investigates the durability properties of SCC containing CR modified using fly ash and CCW. The durability properties considered are water absorption, acid attack, salt resistance, and elevated temperature of the mixes. The experiment was conducted for mixes with no-fly ash content and their replica mixes containing fly ash to replace 40% of the cement. In the mixes, CR was used to partially replace fine aggregate in proportions of 0%, 10%, and 20% by volume, and CCW was used as a partial replacement to cement at 0%, 5%, and 10% by volume. The results indicate that the mixes containing fly ash had higher resistance to acid (H2SO4) and salt (MgSO4), with up to 23% resistance observed when compared to the mix containing no fly ash. In addition, resistance to acid attack decreased with the increase in the replacement of fine aggregate with CR. The same principle applied to the salt attack scenario, although the rate was more rapid with the acid than the salt. The results obtained from heating indicate that the weight loss was reduced slightly with the increase in CCW, and was increased with the increase in CR and temperature. Similarly, the compressive strength was observed to slightly increase at room temperature (27 °C) and the greatest loss in compressive strength was observed between the temperature of 300 and 400 °C. However, highest water absorption, of 2.83%, was observed in the mix containing 20% CR, and 0% CCW, while the lowest water absorption, of 1.68%, was found in the mix with 0% CR, 40% fly ash, and 10% CCW. In conclusion, fly ash is recommended for concrete structures immersed in water, acid, or salt in sulphate- and magnesium-prone areas; conversely, fly ash and CR reduce the resistance of SCC to heat beyond 200 °C. View Full-Text
Keywords: calcium carbide residue; crumb rubber; fly ash; self-compacting concrete; acid attack; salt attack calcium carbide residue; crumb rubber; fly ash; self-compacting concrete; acid attack; salt attack
►▼ Show Figures 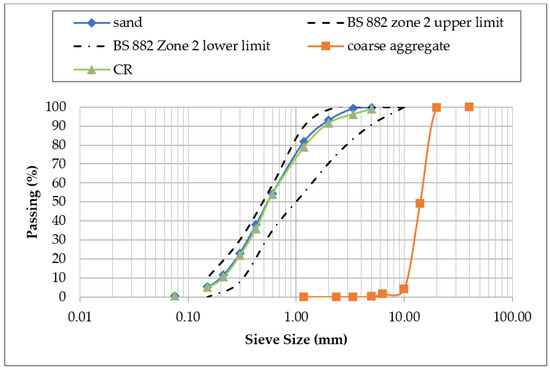