A wrought Al-11.3Si-0.6Mg alloy under hot extrusion (T1), solution treatment (T4), and solution treatment + artificial aging (T6) states were friction stir welded at welding speed of 100 mm/min and rotation rate of 800 rpm. The effect of prior heat-treatment on the microstructure and mechanical properties of the welds were investigated. The results show that the microstructures of the nugget zones have little dependence on the initial states of the base material. In the nugget zones, complete recrystallized structures with equaxied grains in the Al matrix were formed under all conditions. The Si particles in the nugget zones are almost unchanged compared with those of their base materials (BMs) in the three states. In contrast, the joint efficiency of the obtained welds was very sensitive to the initial material condition. The joint efficiency under the T1 state is more than 90% due to the fact that the microstructure is almost unchanged, except for the slight coarsening of the Al matrix grains and some of the Mg2Si phases during the friction stir welding process. However, the joint efficiency in the T4 and T6 conditions is only 77.22% and 62.03%, respectively. The relatively low weld strength in the T4 and T6 conditions is due to the elimination of the solid solution strengthening and age hardening effects during friction stir welding. The hardness distributions along the cross section of joints are all W-shaped under T1, T4, and T6 conditions. View Full-Text
Keywords: Al-Si alloy; friction stir welding; heat-treatment; microstructure; mechanical properties Al-Si alloy; friction stir welding; heat-treatment; microstructure; mechanical properties
►▼ Show Figures 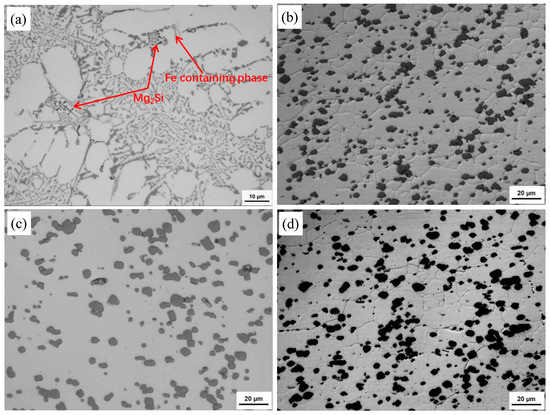