Research on early stages of corrosion of steel bars caused by chloride penetration is relevant in improving the durability of reinforced concrete structures. Similarly, the formation and development of cracks induced in the surrounding concrete is also of great importance. This paper uses integration of the analytical models examined in the published literature, combined with experimental research in corrosion induced at the concrete/steel interface, in estimating the time-to-crack initiation of reinforced concrete subjected to corrosion. This work studies the influence of the porous network and electric current density on the cracking process at early ages. The experimental program was performed by using an accelerated corrosion test. Two types of concrete were performed: A conventional concrete (CC) and a concrete with silica fume (SFC). A current density of 50 μA/cm2 and 100 μA/cm2 was applied to specimens of both concretes. Examination performed by scanning electron microscopy (SEM) and energy-dispersive X-ray spectroscopy (EDS) provided both qualitative and quantitative information on the penetration of the rust layer in the surrounding concrete porous network. Strain gauges were used to measure corrosion-induced deformations between steel and concrete matrices, as well as the formation of corrosion-induced cracks. A good correlation between the rate of penetration of the rust products in the surrounding pores and the delay of the cracking pressure in concrete was observed from the experimental results. This phenomenon is incorporated into the analytical model by using a reduction factor, which mainly depends on the pore size of the concrete. The crack width obtained exhibited a significant dependency on electric current density at the beginning of the test, depending mainly on the pore size of the concrete later. View Full-Text
Keywords: corrosion; concrete cover; cracking; SEM image analysis; rust layer; strain gauge; pore size corrosion; concrete cover; cracking; SEM image analysis; rust layer; strain gauge; pore size
►▼ Show Figures 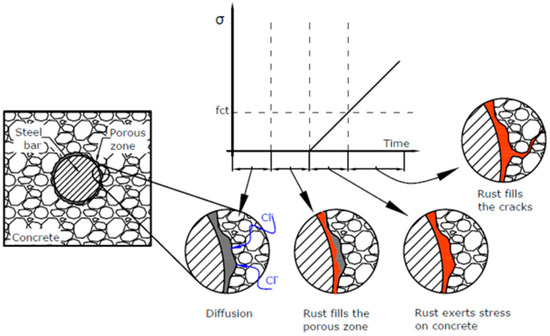