Equal channel angular pressing (ECAP) and multi-axial compression deformation (MAC) are severe plastic deformation (SPD) processes that produce bulk nanostructured materials with ultrafine grains. The grains could be observably refined by multi-pass of ECAP and MAC. This research proposed new routes of cyclic equal channel compression (CECC), which combines ECAP and MAC to increase the mechanical properties of 6061 aluminum alloy. The tests, which are conducted through electron backscattered diffraction (EBSD) and transmission electron microscope (TEM), were performed on the grain size, recrystallization distribution, misorientation distributions, dislocations, and secondary phase distributions of CECC-processed 6061 aluminum alloys on the purpose of exploring the mechanism of grain refinement. MEM is the short form for the CECC processing route of MAC + ECAP + MAC, which is one ECAP pass between two MAC passes. The tests results showed that the average grain size could reach to as much as 1.1 μm after two MEM deformation circles named MEM-MEM, with the non-annealing average grain size being 21 μm and recrystallization annealed average grain size being 28 μm. The dislocation cells, which could be transformed into sub-grains with the increase of the strain, were formed by the slip and the accumulation of dislocations. The secondary phase was Mg2Si, which could prevent the refined grains from growing up again by pinning at the grain boundaries. Above all, the dislocation proliferation and secondary phases will both lead to the grain refinement. View Full-Text
Keywords: grain refinement mechanism; 6061 aluminum alloys; CECC; ECAP; MAC grain refinement mechanism; 6061 aluminum alloys; CECC; ECAP; MAC
►▼ Show Figures 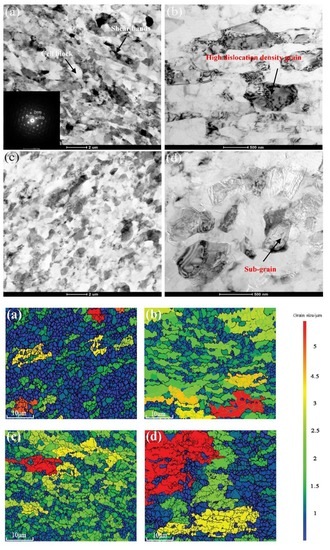