Research on the Thermal Behaviour of a Selectively Laser Melted Aluminium Alloy: Simulation and Experiment

A 3D Finite Element (FE) model was developed to investigate the thermal behaviour within the melt pool during point exposure to Selective Laser Melting (SLM) processed AlSi10Mg powder. The powder–solid transition, temperature-dependent thermal properties, melt pool convection, and recoating phase were taken into account. The effects of Exposure Time (ET) and Point Distance (PD) on SLM thermal behaviour were also investigated and showed that the short liquid phase time and high cooling rate of the melt pool reduced the viscosity of the melt pool at a lower ET or a higher PD. This resulted in poor wettability and the occurrence of balling and micropores. At a higher ET or lower PD the melt pool became unstable and allowed for easy formation of the self-balling phenomenon, as well as further partial remelting in the depth direction resulting in the creation of larger pores. The proper melt pool width (119.8 μm) and depth (48.65 μm) were obtained for a successful SLM process using an ET of 140 μs and a PD of 80 μm. The surface morphologies and microstructures were experimentally obtained using the corresponding processing conditions, and the results aligned with those predicted in the simulation. View Full-Text
Keywords: selective laser melting; numerical analysis; thermal behaviour; AlSi10Mg alloy selective laser melting; numerical analysis; thermal behaviour; AlSi10Mg alloy
►▼ Show Figures 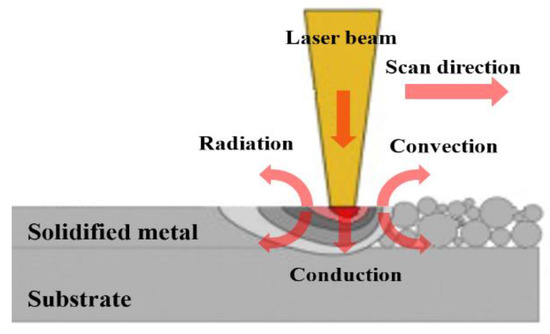