The purpose of this study was to evaluate the bioactivity and cell response of a well-characterized Nurse’s A-phase (7CaO·P2O5·2SiO2) ceramic and its effect compared to a control (tissue culture polystyrene-TCPS) on the adhesion, viability, proliferation, and osteogenic differentiation of ahMSCs in vitro. Cell proliferation (Alamar Blue Assay), Alizarin Red-S (AR-s) staining, alkaline phosphatase (ALP) activity, osteocalcin (OCN), and collagen I (Col I) were evaluated. Also, field emission scanning electron microscopy (FESEM) images were acquired in order to visualise the cells and the topography of the material. The proliferation of cells growing in a direct contact with the material was slower at early stages of the study because of the new environmental conditions. However, the entire surface was colonized after 28 days of culture in growth medium (GM). Osteoblastic differentiation markers were significantly enhanced in cells growing on Nurse’s A phase ceramic and cultured with osteogenic medium (OM), probably due to the role of silica to stimulate the differentiation of ahMSCs. Moreover, calcium nodules were formed under the influence of ceramic material. Therefore, it is predicted that Nurse’s A-phase ceramic would present high biocompatibility and osteoinductive properties and would be a good candidate to be used as a biomaterial for bone tissue engineering. View Full-Text
Keywords: TCP-C2S Nurse’s A-phase ceramic; biomaterials; adult human mesenchymal stem cells; solid state reaction; biomedical applications TCP-C2S Nurse’s A-phase ceramic; biomaterials; adult human mesenchymal stem cells; solid state reaction; biomedical applications
►▼ Show Figures 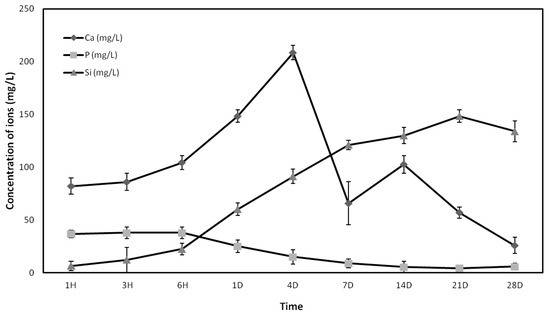