In this study, a holistic energy, economic and environmental assessment was performed on a prosumer-based district heating system, including scenarios with varying district size, retrofitting stages and system configurations. A modeling framework was built which comprises a thermal network design and simulation model; a building energy demand model for districts; and supply and storage technology models that allow assessing system solar fraction, equivalent annual cost and greenhouse gas emissions of district heating systems (DHS). Furthermore, the approach allows comparing the performance of a DHS with individual heating systems (IHS) for the district with the same set of technology options (rooftop-mounted solar thermal collectors, gas boilers and thermal storage tanks). The framework was applied to a Swiss case study. The results of the case study show that DHS often outperform IHS; however, parameters such as the district size, the retrofitting stage of buildings and the system configuration have impacts on the performance of the DHS. The most important parameter lies in the adequate selection of the storage volume over solar collector area ratio, which indicates that DHS solutions are only advantageous if they are properly sized. Smaller districts and districts with retrofitted buildings especially benefit from DHS solutions in terms of energy, economic and environmental performance. Maximum solar fractions of 50% (non-retrofitted case) and 63% (retrofitted case) were reached with the DHS solutions. View Full-Text
Keywords: district heating network; solar thermal collectors; distributed solar prosumers; simulation modeling; thermal storage district heating network; solar thermal collectors; distributed solar prosumers; simulation modeling; thermal storage
►▼ Show Figures 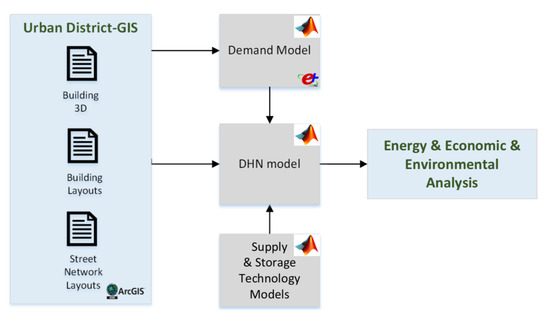