Impact of an Energy Monitoring System on the Energy Efficiency of an Automobile Factory: A Case Study
Previous Article in Journal

The main objective of this work is to analyze and configure appropriately the input vectors to enhance the performance of NARX models to forecast solar radiation one hour ahead. For this study, Engle–Granger causality tests were implemented. Additionally, collinearity among the meteorological variables of the databases was examined. Different databases were used to test the contribution of these analyses in the improvement of the input vectors. For that, databases from three cities of Mexico with different climates were obtained, namely: Chihuahua, Temixco, and Zacatecas. These databases consisted of hourly measurements of the following variables: solar radiation (SR), wind speed (WS), relative humidity (RH), pressure (P), and temperature (T). Results showed that, in all three cases, proper NARX models were produced even when using input vectors formed only with solar radiation and temperature data. Consequently, it was inferred that pressure, wind speed, and relative humidity could be excluded from the input vectors of the forecasting models since, according to the causality tests, they did not provide relevant information to improve the solar radiation forecast in the studied cases. Conversely, these variables could generate spurious results. Forecasting results obtained with the NARX model were compared to the smart persistence model, commonly used to validate SR prediction. Error measures, such as mean absolute error (MAE) and root mean squared error (RMSE), were used to compare prediction results obtained from different models. In all cases, results obtained from the enhanced NARX model surpassed the results of the smart persistence, namely: in Chihuahua up to , in Temixco up to , and in Zacatecas up to . View Full-Text
Keywords: NARX model; collinearity tests; Engle–Granger causality technique; solar radiation forecasting NARX model; collinearity tests; Engle–Granger causality technique; solar radiation forecasting
►▼ Show Figures 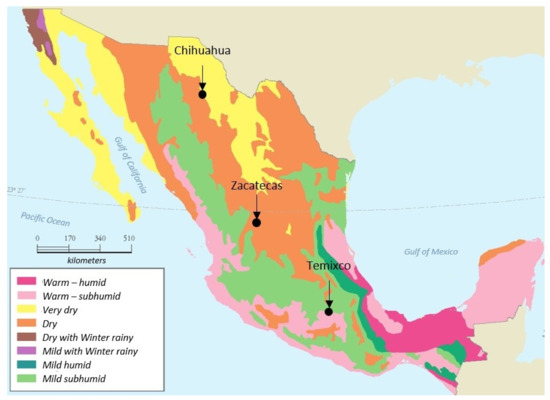