With the increasing penetration of renewable energy sources into modern power systems, parallel inverters with LCL filters are commonly employed in the grid interface, giving rise to potential resonance problems. Among the different resonances, interactive resonance is triggered by interaction among inverters when different current references are applied to parallel inverters. It may also feature a mutual current that circulates among inverters instead of flowing into the grid and introduces harmonics or instability in the control system. In this paper, active disturbance rejection control based on a reduced-order extended state observer (RESO) was proposed for parallel inverters. With the proposed scheme, the interaction between inverters is considered as an exogenous disturbance caused by other parallel inverters, estimated by the RESO, and rejected by the controller. In the results, the mutual current and interactive harmonics, calculated via fast Fourier transform, were reduced with the proposed control scheme. Thus, the lower total harmonic distortion of each current was achieved. Additionally, the robust stability and less model-dependent control design are the other additive advantages over the derivative filtered capacitor voltage feedforward-based active damping using PI control. The simulation and real-time experimental results of the conventional and proposed scheme, obtained using the hardware-in-loop, were presented to verify the theoretical analysis under the similar and different current reference cases. View Full-Text
Keywords: active disturbance rejection control; circulating current; extended state observer; parallel grid-connected inverters; resonance active disturbance rejection control; circulating current; extended state observer; parallel grid-connected inverters; resonance
►▼ Show Figures 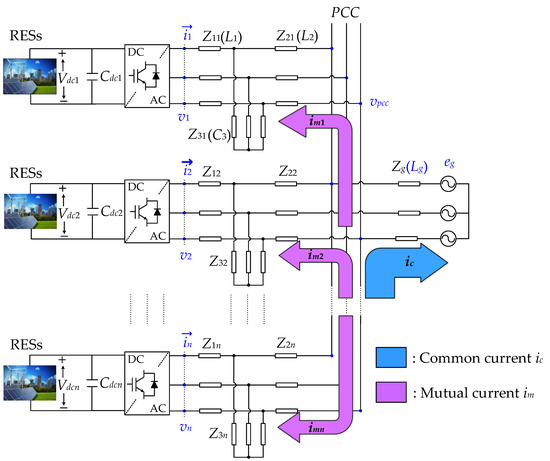