This work investigates the use of iron oxide (III)–therminol 66 oil-based nanosuspensions in a convective heating system with potential heating applications in the buildings sector. In an experimental study, characteristics of nanofluids were measured, including heat capacity, thermal conductivity, and density. The influences of mass flow rate and concentration of nanofluid on various parameters were quantified, such as pressure loss, friction coefficient, and heat transfer rate. For a concentration of 0.3 wt.%, the heat transfer increased by 46.3% and the pressure drop increased by 37.5%. The latter is due to the higher friction and viscosity of the bulk of the nanofluid. Although the pressure drop is higher, the thermo-hydraulic efficiency still increased by 19%. As a result, iron oxide (III)–therminol 66 presented reasonable thermal performance, higher heat transfer coefficient, and a lower pressure drop value (19% better performance in comparison with water) for the air–liquid convective system. Results also showed that for nanosuspensions at 0.3 wt.%, the friction factor of the system increased by 10% in comparison with the performance of the system with water. View Full-Text
Keywords: convective heating system; radiator; building heating; nanofluid; thermo-hydraulic performance; therminol 66 convective heating system; radiator; building heating; nanofluid; thermo-hydraulic performance; therminol 66
►▼ Show Figures 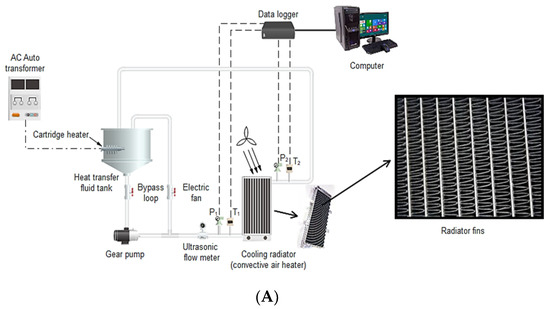