Gas Supply, Pricing Mechanism and the Economics of Power Generation in China

Model for Estimation of Fuel Consumption of Cruise Ships

:
This article presents a model to estimate the energy use and fuel consumption of cruise ships that sail Norwegian waters. Automatic identification system (AIS) data and technical information about cruise ships provided input to the model, including service speed, total power, and number of engines. The model was tested against real-world data obtained from a small cruise vessel and both a medium and large cruise ship. It is sensitive to speed and the corresponding engine load profile of the ship. A crucial determinate for total fuel consumption is also associated with hotel functions, which can make a large contribution to the overall energy use of cruise ships. Real-world data fits the model best when ship speed is 70–75% of service speed. With decreased or increased speed, the model tends to diverge from real-world observations. The model gives a proxy for calculation of fuel consumption associated with cruise ships that sail to Norwegian waters and can be used to estimate greenhouse gas emissions and to evaluate energy reduction strategies for cruise ships.
Keywords:
cruise ship; AIS-data; fuel consumption; energy use; CO2 emissions

The data set contains geographical locations as well as speed measured at different time intervals for each cruise ship entering Norwegian waters in 2016. The time interval is by default 5 min, but this may vary. The data are measured per ship per month.
In the model, speed registrations between two consecutive geographical locations are interpolated to correct for different time intervals between registrations. This means that all speed and fuel consumption calculations are made for the same time unit, which is one minute.
For each ship, time spent in port is also measured on the same time interval. This makes it possible to have different algorithms for calculating fuel consumption for different modes such as operations in open sea, manoeuvring into port and staying in port.
As part of this project, a database with information for 169 cruise ships based on information from SeaWeb has been created. The database covers all the ships operating in Norwegian waters in 2016. It contains information about ship properties such as gross weight, berths, year built, power rating based on MCR (maximum continuous rating), machine configuration (i.e., diesel-electric or not), number of main and auxiliary engines and generators, numbers and type of propellers, and service and maximum speed.

The algorithm is based on the following steps:
Fuel consumption at sea is only calculated if the recorded speed is larger than 4 knots. For speed records below this limit, the ship is assumed to be in port or manoeuvring.
Equation (12) is taken from the Smith et al. ([1] p. 177) It is used to calculate the power rating required to attain a given speed for a given ship at a given location. Applied power for a given speed is defined as: where P is engine power, V is speed and D is draught while t is measurements for these properties at time t and ref indicates reference values for the same properties. The reference value for speed is the ship’s service speed [44]. The symbol is a constant (1.15) allowing for the effect of weather on propulsion efficiency while is a constant describing the effect of fouling on the same efficiency (1.09). The value n is the ratio of speed and power and has a constant value of 3.
Draught data for cruise ships are not collected in the same time interval as speed data, and as a result draught registrations for a specific cruise ship cannot be joined with its speed registrations. According to US Navigation Center [45], draught is measured in decimetres (1/10 m), but the exact point of measurement on the ship (e.g., bow, amidships or stern), is undefined. Some ships have static draught which means that its measurement does not change during sailing. Therefore, draught registrations should be taken more as indications as real time measurements. Here, the draught factor is defined as a ratio of the minimum registered draught for a ship over its maximum as shown in Equation (13). Several ships are registered with obviously ‘wrong’ draughts. For example, the cruise ship Mein Schiff 1 is registered with a draught of 0.1 on 5 September, at 19:36:43. At this time, the ship was sailing in the outer parts of the Oslofjord, approximately at the position latitude = 58.915, longitude = 10.488. There are several registrations for this ship with draughts below 1, which is obviously wrong. In the database, the 90th percentile for the ratio of maximum registered draught to the minimum one has a value of 1.785. The model assumes that no draught for a given ship can be less than 1/1.785 of the maximum registered draught for that ship. The draught factor is defined as follows:
Equation (12) will provides the applied power in kW for a given speed. Since the installed engine power for each ship is known, the load factor for that speed can be calculated, as shown in Equation (14). Instantaneous load factor is defined as follows: is the instantaneous load factor at time t required to produce the power necessary to attain a given speed.
For diesel-electric ships, the reference power is calculated using a propulsion factor. The propulsion power is defined as the sum of power yield for each electric motor. This power as a proportion of total power is defined as the propulsion factor for diesel-electric ships. The assumption is that these ships use a proportion of total power for auxiliary purposes such as lightning, HVAC (Heating, Ventilation and Air Conditioning), and hot water provision. The propulsion power then measures the proportion of total power exclusively used for propulsion; the remainder (1 minus the propulsion factor) being used for auxiliary purposes. Propulsion factor is defined as follows:
Reference power for diesel-electric ships is defined as follows:
Equation (15) shows the formula for finding PF, the propulsion factor. In the equation, EPi is the power of the i’th electric motor, n is number of electric motors, TP is the ship’s total power. The propulsion factor PF is then used in Equation (16) to find the reference power for diesel-electric ships.
The next step is to calculate specific fuel consumption based on the load factor at time t. The specific fuel consumption is taken from Smith et al. ([1], p. 110). Instantaneous specific fuel consumption is defined as follows:
Equation (17) calculates the instantaneous fuel consumption at time t given a baseline and the load factor from Equation (14). The baseline is taken from Smith et al. (Table 49 in [1] p. 109). It gives the baseline fuel consumption in g/kWh for high speed diesel engines built in different periods. The table is reproduced in Table 1.
The final step is to calculate the time span for the fuel consumption in Equation (17). This is done by calculating the minutes between two speed registrations for a cruise ship. The minutes are converted into hours to derive an estimated kWh for a given kW. Instantaneous kWh is defined as follows:
Equation (18) gives the calculated kWh at a time t. The symbol t0 is the previous time registration and the value for Pt is taken from Equation (12). Instantaneous fuel consumption in tons is defined as follows:
Equation (19) shows calculation of fuel consumption at time t (Ft) based on instantaneous kilowatt-hours and instantaneous specific fuel consumption (SFCt) taken from Equation (17).

2.6. Stay in Port: The Case of Finnmarken

In some cases, the estimated nautical miles and the corresponding time span fit poorly with the recorded speed. This is especially true when the time span is more than the default 5 min and the assumption that the registered speed is the same for the whole time span is inappropriate. Therefore, if a time span exceeds 15 min it is set to a default of 5 min. An extra filter is applied to exclude high recorded speed values relative to calculated nautical miles. This filter, shown in Equation (32), calculates speed in knots based on the time span and estimated nautical miles based on latitude and longitude values. If this estimated speed is less than the cut-off value of 4 knots, it is assumed that the ship is in port or manoeuvring in port. Calculated speed filter is defined as follows:

The model presented in the article is available online at: http://fling.jostedal.no/Cruise/.

The project is funded by the Research Council of Norway Regional Research Fund West. We are grateful to Hurtigruten AS for providing access to the data and Ole Christian Walle and Arne Solberg who assisted in validating the data. 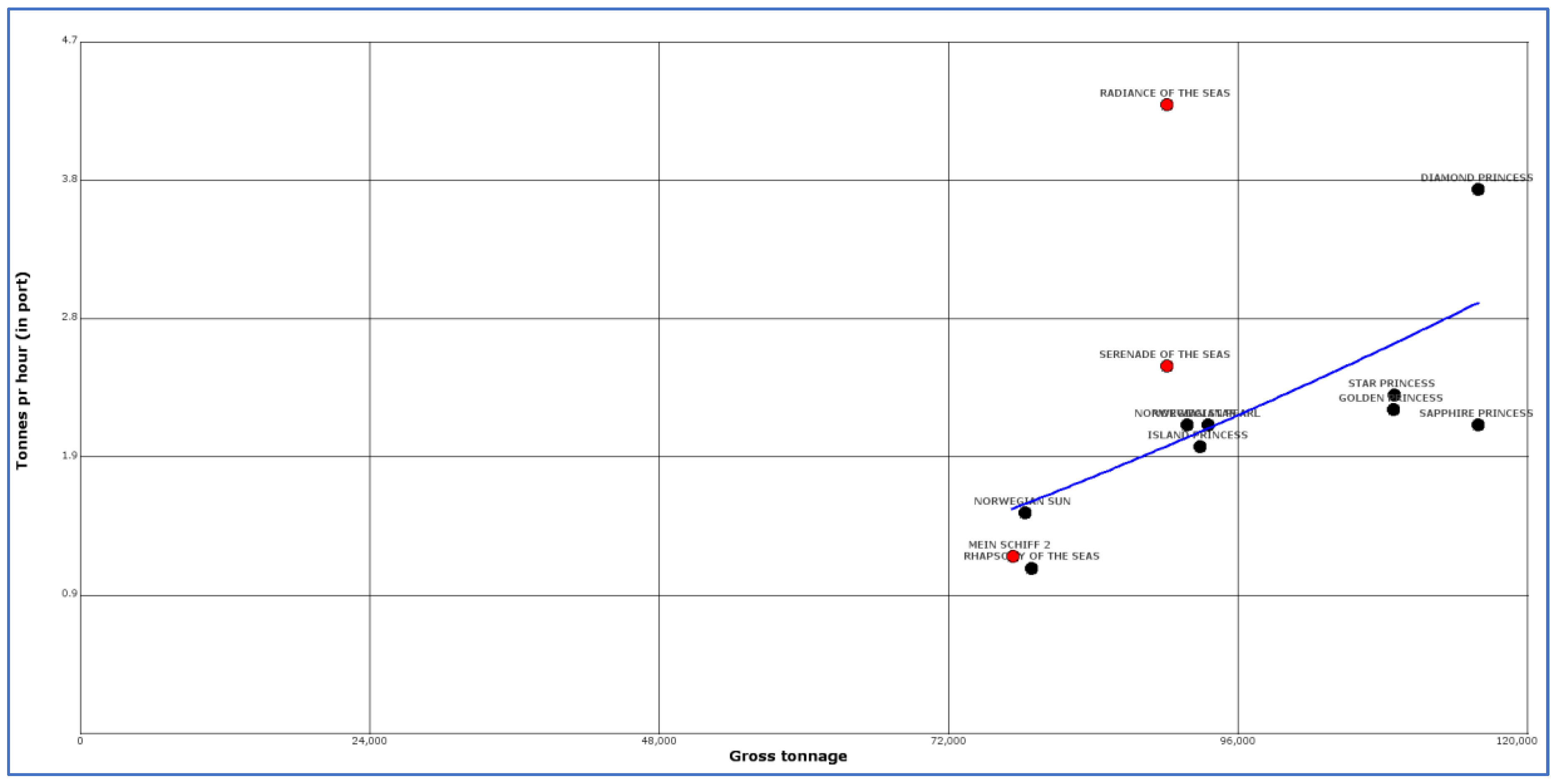 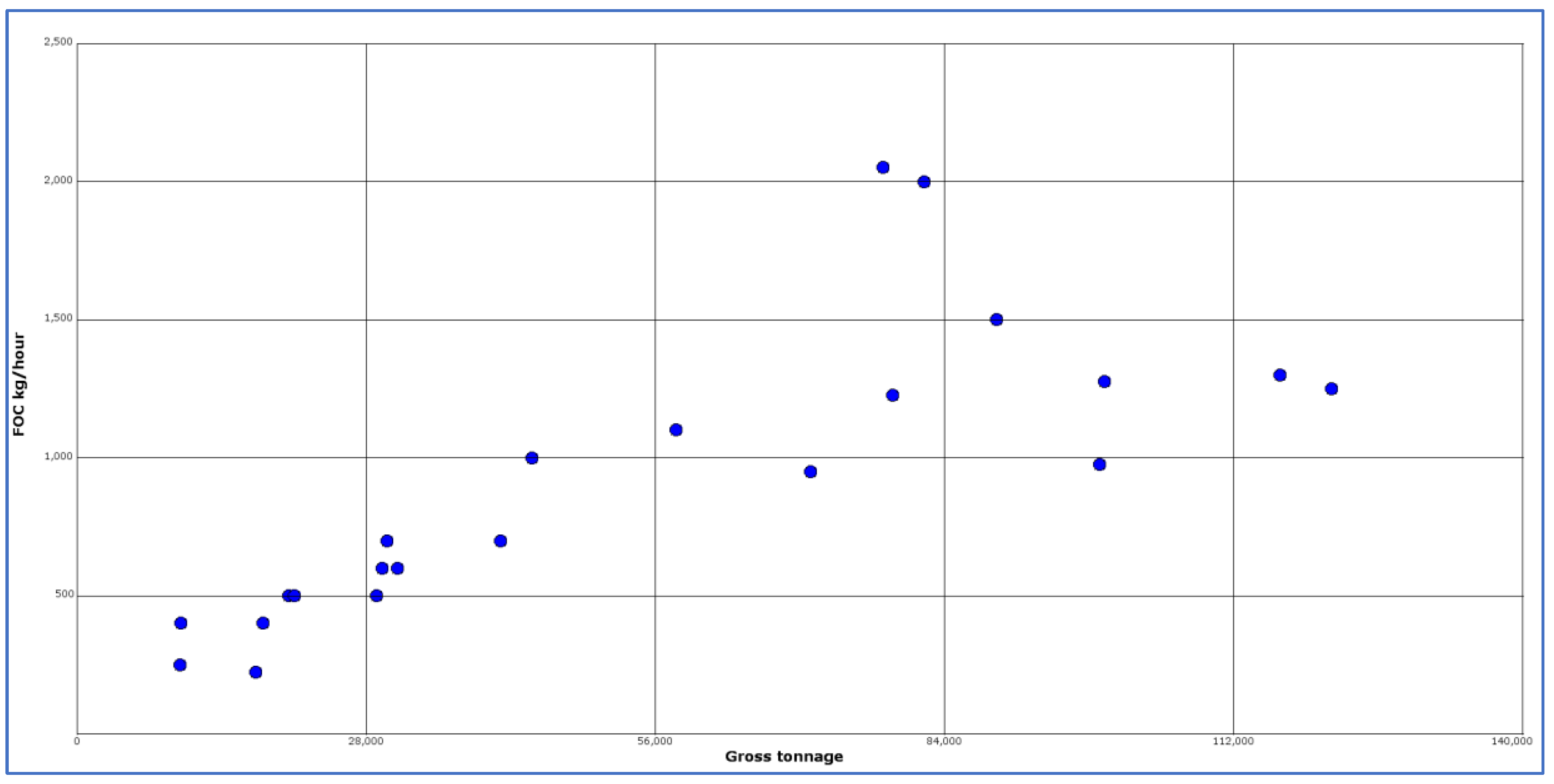 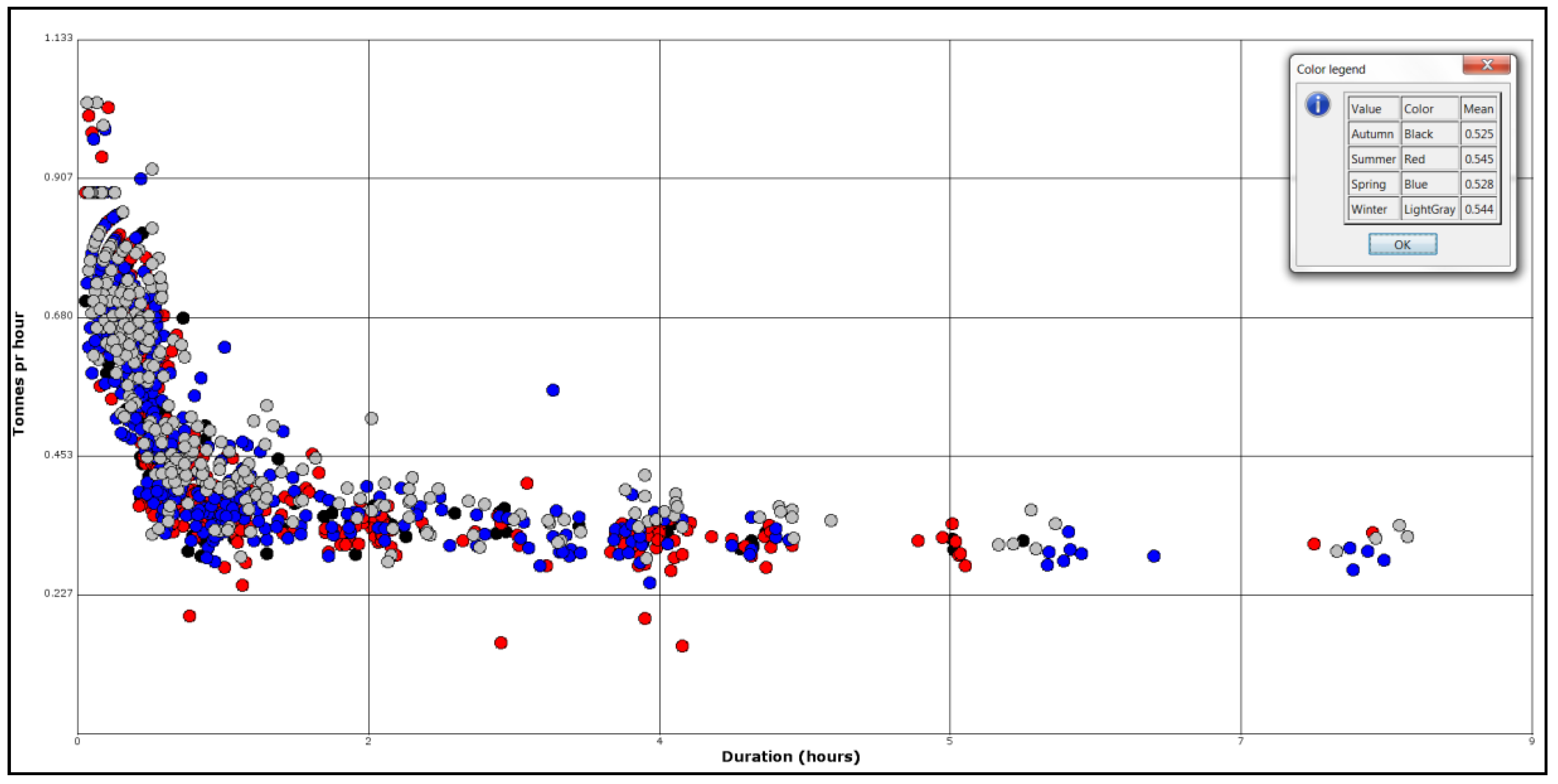 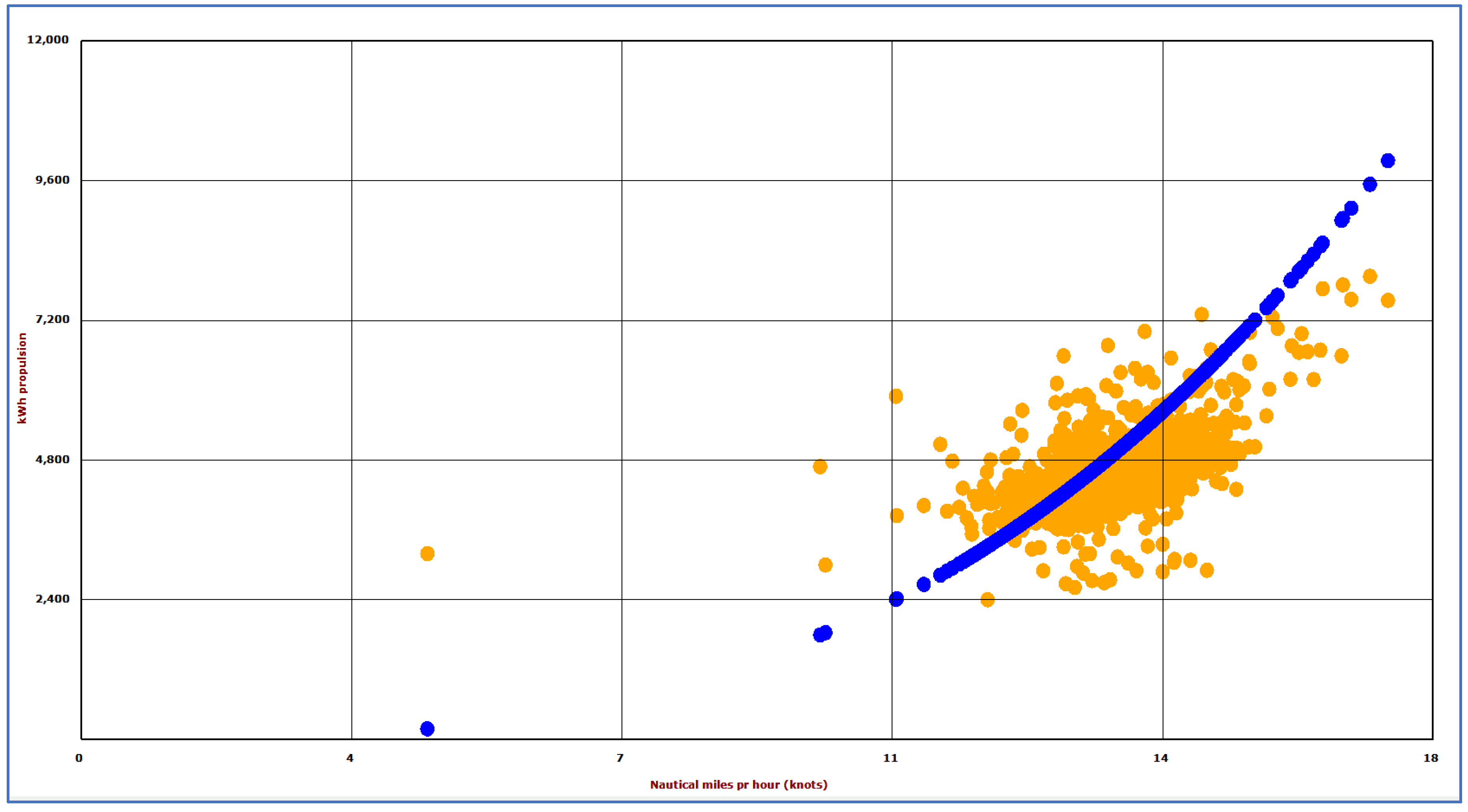 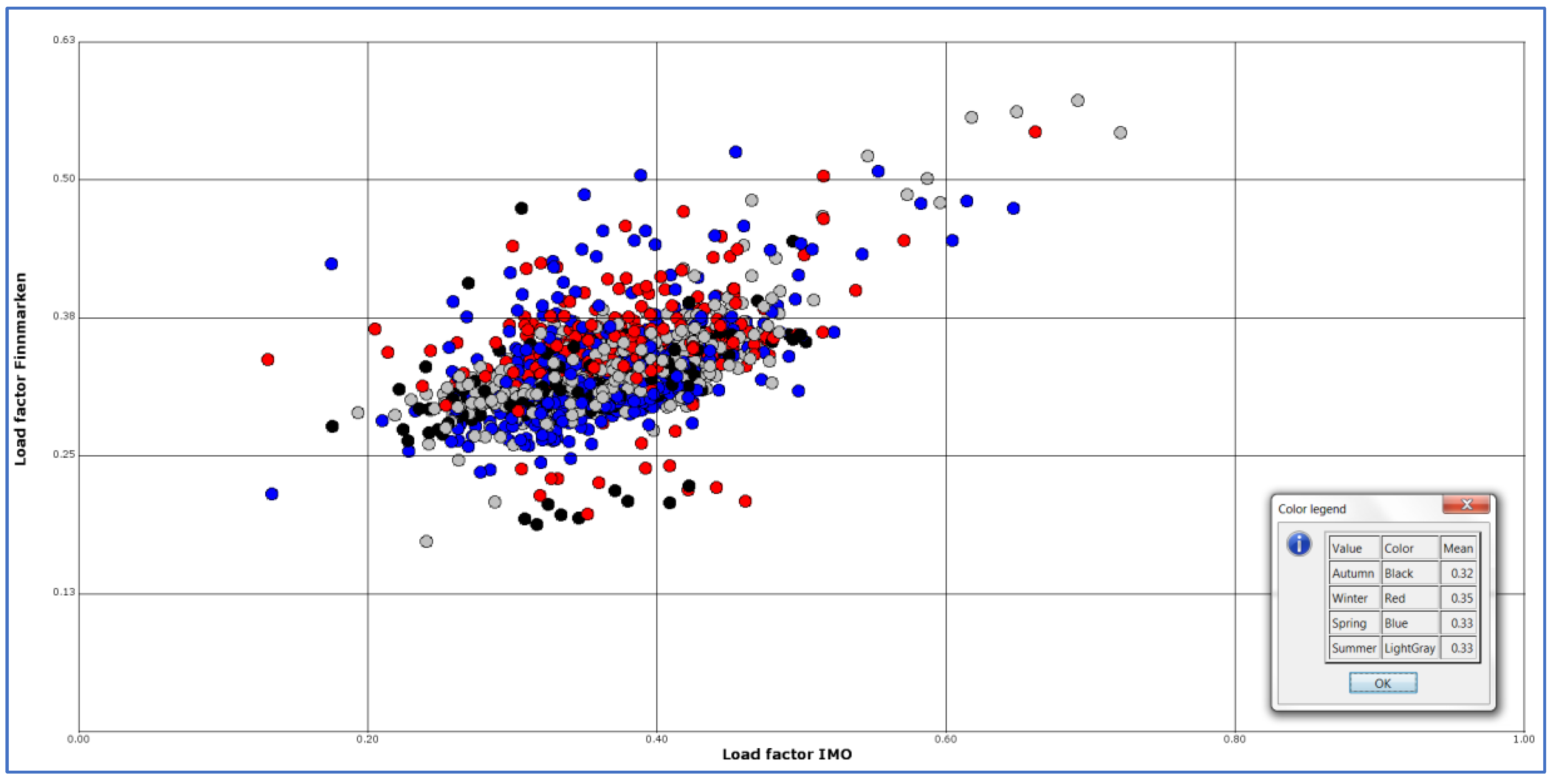 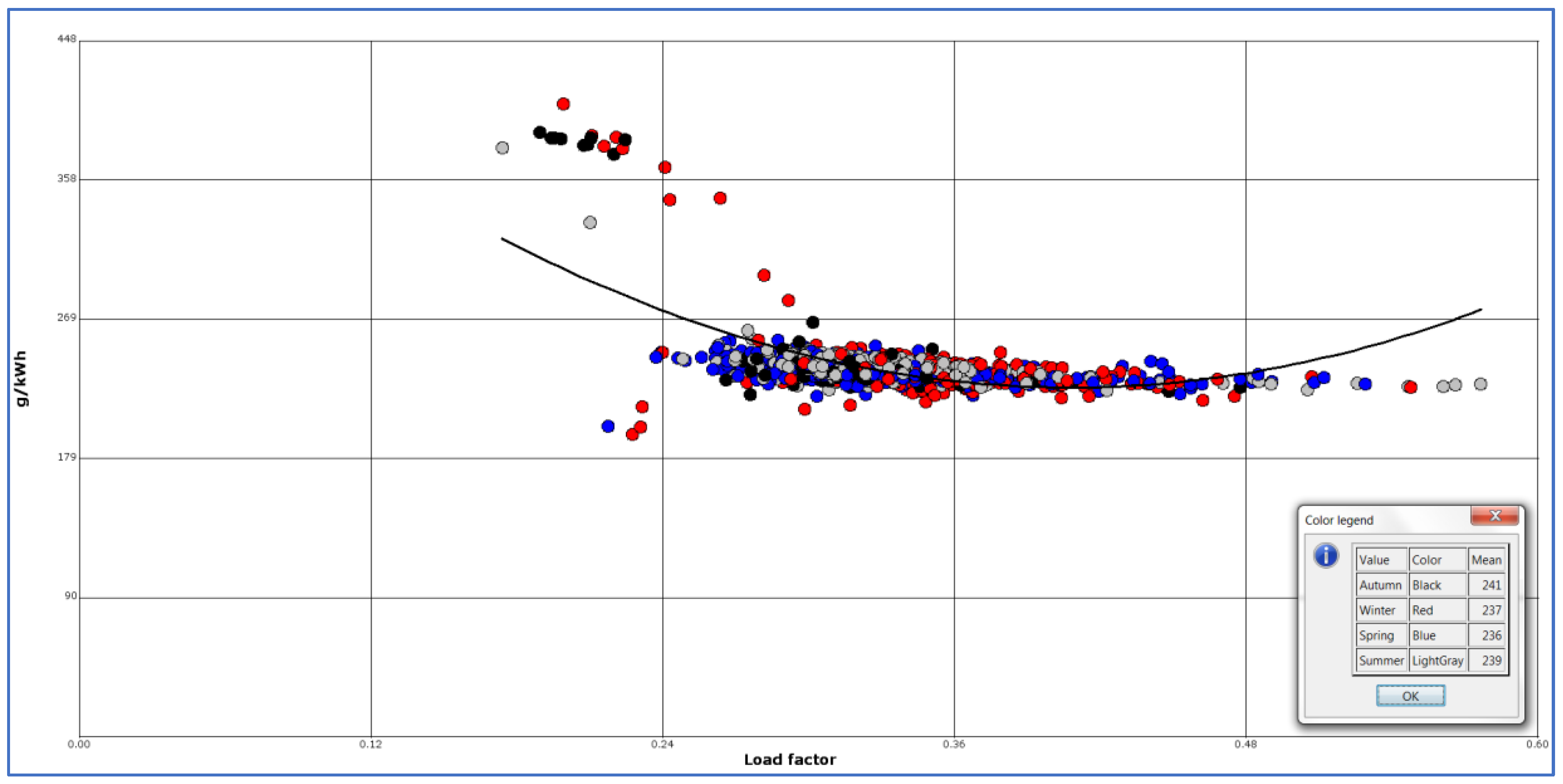 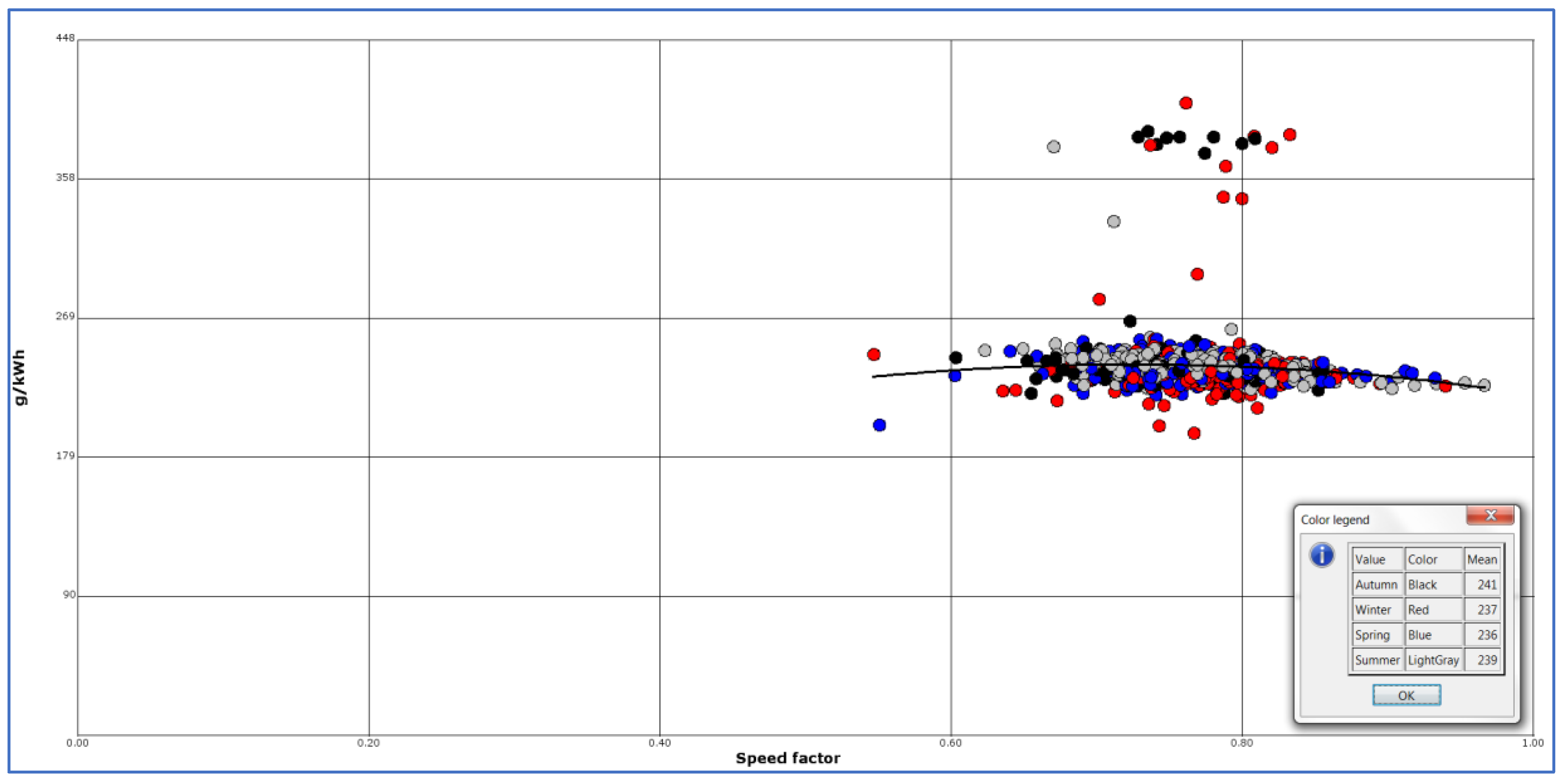