Effective ventilation planning is vital to underground mining. To ensure stable operation of the ventilation system and to avoid airflow disorder, mine ventilation network (MVN) models have been widely used in simulating and optimizing the mine ventilation system. However, one of the challenges for MVN model simulation is that the simulated airflow distribution results do not match the measured data. To solve this problem, a simple and effective calibration method is proposed based on the non-linear optimization algorithm. The calibrated model not only makes simulated airflow distribution results in accordance with the on-site measured data, but also controls the errors of other parameters within a minimum range. The proposed method was then applied to calibrate an MVN model in a real case, which is built based on ventilation survey results and Ventsim software. Finally, airflow simulation experiments are carried out respectively using data before and after calibration, whose results were compared and analyzed. This showed that the simulated airflows in the calibrated model agreed much better to the ventilation survey data, which verifies the effectiveness of calibrating method. View Full-Text
Keywords: mine ventilation network; model calibration; non-linear optimization; Ventsim mine ventilation network; model calibration; non-linear optimization; Ventsim
►▼ Show Figures 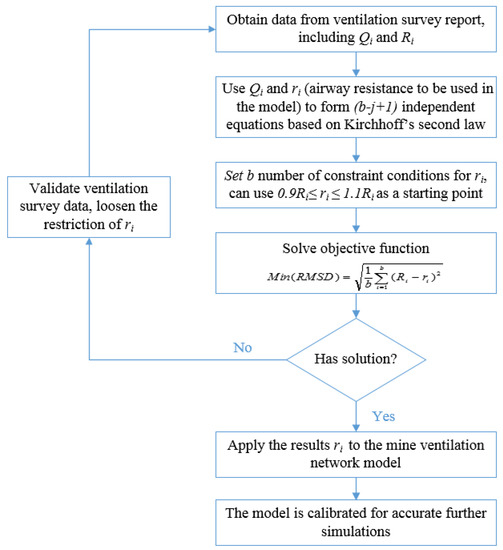