Manifestation of malignant lymphoma in the spine is rare; there have only been a few cases reported in the literature. Due to its rarity, there is no gold standard for the management of patients suffering from spinal lymphoma manifestations. Methods: We retrospectively reviewed the data for 37 patients (14 female, 23 male) with malignant lymphoma in the spine receiving intervention in our center from March 2006 until June 2020. Neurological impairment, pain, diagnostics, and/or surgical instability were the criteria for surgery in this patient cohort. Otherwise, only CT-guided biopsies were conducted. Analysis of the patient cohort was based on the Karnofsky performance status scale (KPSS), location of the lesion, spinal levels involved, spinal instability neoplastic score (SINS), surgical treatment, histopathological workup, adjuvant therapy, and overall survival. The following surgical procedures were performed: posterior stabilization and decompression in nine patients; decompression and/or tumor debulking in 18 patients; a two-staged procedure with dorsal stabilization and vertebral body replacement in four patients; decompression and biopsy in one patient; a two-stage procedure with kyphoplasty and posterior stabilization for one patient; posterior stabilization without decompression for one patient; a vertebroplasty and cement-augmented posterior stabilization for one patient; and a CT-guided biopsy alone for two patients. Twenty-one patients (56.78%) had ≥1 lesion in the thoracic spine, 10 patients (27.03%) had lesions in the lumbar spine, two patients had lesions in the cervicothoracic junction, two patients had lesions in the thoracolumbar junction, one patient had a lesion in the lumbosacral junction, and one patient had a lesion in the sacrum. The diagnoses of the histopathological workup were diffuse large B-cell lymphoma in 23 (62.16%) cases, indolent lymphoma in 11 (29.74%) cases, anaplastic T-cell lymphoma in one case (2.70%), T-cell lymphoma in one case (2.70%), and Burkitt lymphoma in one (2.70%) case. The median overall survival was 7.2 months (range 0.1–266.7 months). Pre- and postoperative KPSS scores were 70% (IQR 60–80%). Manifestation of malignant lymphomas in the spine is rare. Similar to the approach taken for spine metastases, a surgical intervention in cases of neurological impairment or manifest or potential instability is indicated, followed by chemoimmunotherapy and radiotherapy. View Full-Text
Keywords: malignant lymphoma; bone lymphoma; spine surgery; diffuse large B-cell lymphoma; epidural compression malignant lymphoma; bone lymphoma; spine surgery; diffuse large B-cell lymphoma; epidural compression
►▼ Show Figures 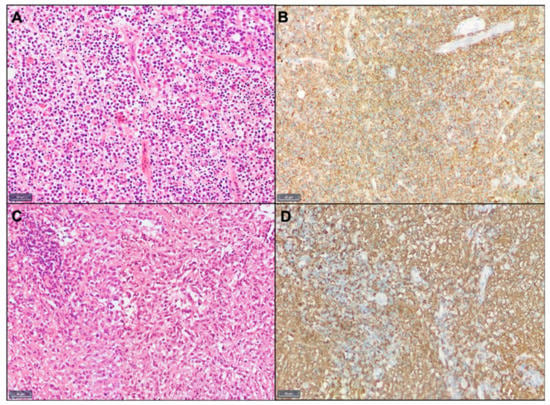