Quality of Life and Mental Health in Children and Adolescents after the First Year of the COVID-19 Pandemic: A Large Population-Based Survey in South Tyrol, Italy
Previous Article in Journal

It Takes Time: Vigilance and Sustained Attention Assessment in Adults with ADHD

Healthy Choices in Midlife Predict Survival to Age 85 in Women: The Tromsø Study 1979–2019

The aim of this study is to examine the association between single risk factors and multiple risk factors in midlife and older ages (up to 64 years) and survival to the age of 85 years in women. The study sample comprised 857 women who attended the second survey of the population-based Tromsø Study (Tromsø2, 1979–1980) at the ages of 45–49 years and were followed for all-cause mortality until 85 years of age. Daily smoking, physical inactivity, being unmarried, obesity, high blood pressure, and high cholesterol in midlife were used as explanatory variables in survival analyses. In total, 56% of the women reached the age of 85. Daily smoking, physical inactivity, being unmarried, and obesity were significant single risk factors for death before the age of 85. None of the women had all six risk factors, but survival to age 85 did decrease gradually with increasing number of risk factors: from 67% survival for those with no risk factors to 28% survival for those with four or five risk factors. A subset of the study sample also attended the third and fourth surveys of the Tromsø Study (Tromsø3, 1986–1987 and Tromsø4, 1994–1995, respectively). Women who quit smoking and those who became physically active between Tromsø3 and Tromsø4 had higher survival when compared to those who continued to smoke and remained physically inactive, respectively. This study demonstrates the importance of having no or few risk factors in midlife with respect to longevity. We observed a substantial increase in the risk of death before the age of 85 among women who were daily smokers, physically inactive, unmarried, or obese in midlife. This risk may be mitigated by lifestyle changes, such as quitting smoking and becoming physically active later in life. View Full-Text
Keywords: survival analysis; longevity; cohort; risk factors; Tromsø Study survival analysis; longevity; cohort; risk factors; Tromsø Study
►▼ Show Figures 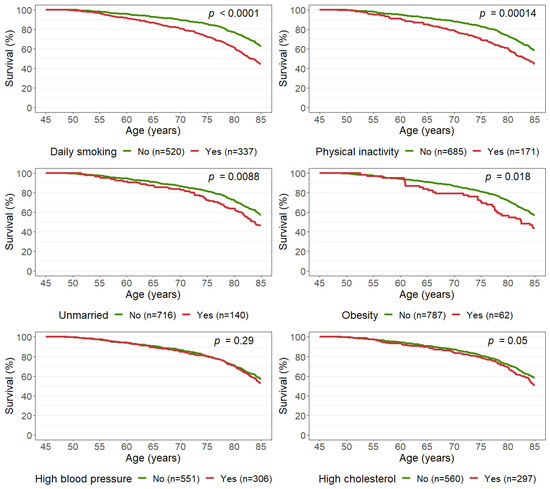