Bounded Rationality and Heuristics: Do We Only Need to Score in Order to Win Individual Awards in Basketball?
Previous Article in Special Issue

Studies have found that the prevalence of chronic fatigue syndrome (CFS) in adolescents has continued to increase over the years, affecting learning and physical health. High school is a critical stage for adolescents to grow and mature. There are inadequate detection and rehabilitation methods for CFS due to an insufficient understanding of the physiological mechanisms of CFS. The purpose of this study was to evaluate the effect and metabolic mechanisms of an aerobic running intervention program for high school students with CFS. Forty-six male high school students with CFS were randomly assigned to the exercise intervention group (EI) and control group (CFS). Twenty-four age- and sex-matched healthy male students were recruited as healthy controls (HCs). The EI group received the aerobic intervention for 12 weeks, three times a week, in 45-min sessions; the CFS group maintained their daily routines as normal. The outcome measures included fatigue symptoms and oxidation levels. Keratin was extracted from the nails of all participants, and the oxidation level was assessed by measuring the content of 3-Nitrotyrosine (3-NT) in the keratin by ultraviolet spectrophotometry. All participants’ morning urine was collected to analyze urinary differential metabolites by the GC-MS technique before and after the intervention, and MetaboAnalyst 5.0 was used for pathway analysis. Compared with before the intervention, the fatigue score and 3-NT level in the EI group were significantly decreased after the intervention. The CFS group was screened for 20 differential metabolites involving the disruption of six metabolic pathways, including arginine biosynthesis, glycerolipid metabolism, pentose phosphate pathway, purine metabolism, β-alanine metabolism, and arginine and proline metabolism. After the intervention, 21 differential metabolites were screened, involved in alterations in three metabolic pathways: beta-alanine metabolism, pentose phosphate metabolism, and arginine and proline metabolism. Aerobic exercise was found to lessen fatigue symptoms and oxidative levels in students with CFS, which may be related to the regulation of putrescine (arginine and proline metabolism), 6-Phospho-D-Gluconate (starch and sucrose metabolism pathway), and Pentose (phosphate metabolism pathway). View Full-Text
Keywords: chronic fatigue syndrome; adolescent; middle school student; aerobic exercise; metabolomics chronic fatigue syndrome; adolescent; middle school student; aerobic exercise; metabolomics
►▼ Show Figures 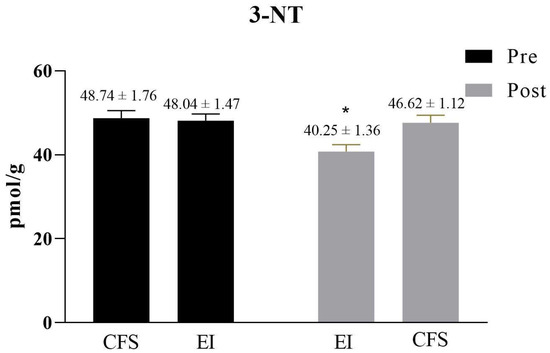