Deep Ensemble Learning Approaches in Healthcare to Enhance the Prediction and Diagnosing Performance: The Workflows, Deployments, and Surveys on the Statistical, Image-Based, and Sequential Datasets
Previous Article in Special Issue

Food Systems Transformation for Child Health and Well-Being: The Essential Role of Dairy

Mortality and Alcohol as Its Cause—Comparative Characteristics of the Two Neighboring Countries: Ukraine and Poland

This paper presents a comparative assessment of mortality in Poland and Ukraine, including due to alcohol consumption, by sex, place of residence, and age groups. Mortality from alcohol consumption is and remains one of the health problems of the state’s population. The aim of this study was to establish the difference in mortality, including due to alcohol consumption, in the two neighboring countries. The analysis was conducted in 2008 and 2018 according to statistical institutions in Poland and Ukraine. Data from the codes of the International Statistical Classification of Diseases of the 10th edition: F10, G31.2, G62.1, I42.6, K70, K86.0, and X45 were used to calculate mortality due to alcohol consumption. The share of mortality caused by alcohol consumption in Ukraine in 2008 was 3.52%, and 1.83% in 2018. At the same time, in Poland, there is an increase in this cause of death from 1.72% to 2.36%. Mortality caused by alcohol consumption is the main share of mortality in the section “Mental and behavioral disorders” in both Ukraine, at 73–74%, and Poland, at 82–92%. Changes in the mortality rate in the cities and villages of Ukraine and Poland showed different trends: Poland nated, a significant increase in mortality, while in Ukraine it has halved on average. Overall and alcohol mortality rates in both countries were higher among the male population. The analysis of mortality among people of working age showed that the highest proportion of deaths from alcohol consumption in both countries was among people aged 25–44. Despite the geographical proximity, and similarity of natural and climatic characteristics and population, mortality rates in each country reflect the difference in the medical and demographic situation, and the effectiveness of state social approaches to public health. View Full-Text
Keywords: mortality; alcohol; working population; Poland; Ukraine mortality; alcohol; working population; Poland; Ukraine
►▼ Show Figures 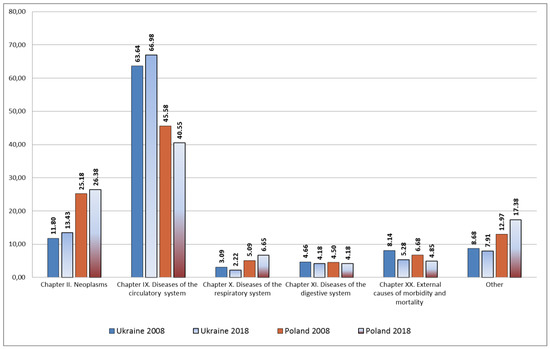