Mental Health Difficulties and Countermeasures during the Coronavirus Disease Pandemic in Japan: A Nationwide Questionnaire Survey of Mental Health and Psychiatric Institutions

A novel coronavirus disease (COVID-19) that causes severe acute respiratory syndrome was identified in December 2019, and the disease has rapidly spread worldwide. The COVID-19 pandemic has persisted through 2021 and caused extensive damage globally. As of February 2021, the total number of infected people worldwide exceeded 100 million, and the total number of deaths exceeded 2.3 million [1]. In Japan, as of December 2020, the number of infected people has been rapidly increasing nationwide [2] (Figure 1). Among the general population, there has been an ongoing experience of anxiety about potential infection, fear of severe illness, death, and related economic problems as well as of loneliness and isolation due to social distancing measures. Under these circumstances, it is essential to maintain and improve the resilience of people and mental health.
Worldwide, there has been an increase of mental health difficulties during the COVID-19 pandemic [3]. Incidences of psychosis, mood disorders, and anxiety disorders are significantly higher in people following COVID-19 diagnosis than the incidences in people with other infections such as influenza [4]. In addition, COVID-19 is having a major impact on mental health in infected and uninfected people. In the United States, approximately 45% of the population has experienced psychological distress during the COVID-19 pandemic [5]. A longitudinal study of psychiatric diseases in the United States demonstrated that history of psychiatric disease and reduced income due to the pandemic were associated with increased risk of COVID-19 [6]. A Chinese study of the impact of COVID-19 on the mental health of 1434 patients with ill mental health (unknown diagnoses) reported that 300 (20.9%) experienced worsening of mental symptoms during the COVID-19 pandemic [7]. Health care workers also experienced increases in symptoms of depression, anxiety, and obsessive-compulsive symptom, whereas the general population experienced increases in anxiety and depression and a decreased feeling of well-being. The impact of COVID-19 on mental health is serious, and the United Nations and the World Health Organization (WHO) [8] have urged countries to strengthen their countermeasures.
In Japan, the number of mental health consultations related to COVID-19 in mental health administrative services increased approximately 2.8 times from April to May 2020 [9]. However, the related specific measures and early intervention methods are not fully developed, and there are no standard guidelines or protocols. Furthermore, in Japan, there are no appropriate countermeasures against the increased depression and suicide rates. The suicide rate in Japan is higher than that in other developed countries. Ten years ago, the annual number of suicides was approximately 30,000 (22.6 per 100,000 population), and with increased national efforts in the last 10 years, the annual number of suicides decreased to approximately 20,000 (15.7 per 100,000 population) (Figure 2) [10]. However, a research group at Kyoto University has suggested that the annual number of suicides in Japan may increase to 40,000 due to the influence of COVID-19 [11]; therefore, suicide prevention is an urgent issue.
In Japan, institutions called “mental health and welfare centers” provide public mental health services. Mental health and welfare centers are in 47 prefectures and 22 government-designated cities to disseminate knowledge, conduct research, and provide consultations and guidance regarding the community mental health and welfare of patients with a mental health disorder. They also play a central role in improving the community’s mental health and well-being. The staff consists of psychiatrists, nurses, psychologists, and psychiatric social workers. All residents in Japan can receive consultations for mental health difficulties free of charge. However, mental health and welfare centers do not provide pharmacotherapy or intensive psychotherapy since they are not medical institutions. Therefore, individuals requiring such care are referred to psychiatric institutions.
In Japan, mental health and welfare centers are providing consultations for COVID-19-related mental health difficulties ranging from mild to severe, indicating that the centers are playing a key role in mental health services. However, to our knowledge, there are no data regarding the number of monthly consultations, contents of consultation, psychological intervention performed, or the current status of remote consultations in mental health and welfare centers. Therefore, this study aimed to determine the current status of mental health care (psychological assessment and intervention methods) related to COVID-19, provided by mental health and psychiatric care workers in mental health and welfare centers across the country, using a questionnaire survey.

A questionnaire survey was conducted to collect information from study institutions from 1 November to 31 December 2020.

This study included 1000 institutions, consisting of all mental health and welfare centers (n = 69) and psychiatric institutions (n = 931) selected from 1200 specialized psychiatric hospitals, 1600 psychiatric clinics, and 890 psychiatric departments of university and general hospitals in Japan, via stratified random sampling. The institutions were assigned a randomly generated number in an Excel spreadsheet, and the list of random numbers was then sorted in the ascending order. From this list, we sequentially selected the institutions.

2.3.2. Information on Contents of Consultation

The data obtained were anonymized, and statistical analysis was performed by INTAGE Research Inc. Simple tabulation and cross-tabulation were performed using the Lyche-Epoch aggregation tool. The anonymized data, correspondence table, and aggregate results were stored by Kyushu University.

3.2. Information on Contents of Consultation

This study was supported by the Health, Labour, and Welfare Policy Research Grants 2020.

This study was approved by the Kyushu University Institutional Review Board for Clinical Research (approval number: 2020-452).

The data presented in this study are available on request from the corresponding author. The data are not publicly available due to privacy protection.

This study was part of the following projects: “Study on the development and dissemination of early intervention methods for mental health problems such as anxiety by psychiatric health workers during the COVID-19 pandemic (project number 20CA2074)” supported by Health Labour and Welfare Policy Research Grants (Health and Labour Sciences Research Grants) 2020; “Development of an infrastructure system for remote mental health care allowing early intervention under the circumstances associated with the COVID-19 pandemic and its practical validation” supported by Research and Development Grants for Comprehensive Research for Persons with Disabilities in the project for psychiatric disorders from the Japan Agency for Medical Research and Development 2020, 2021 (project number: JP21dk0307099). 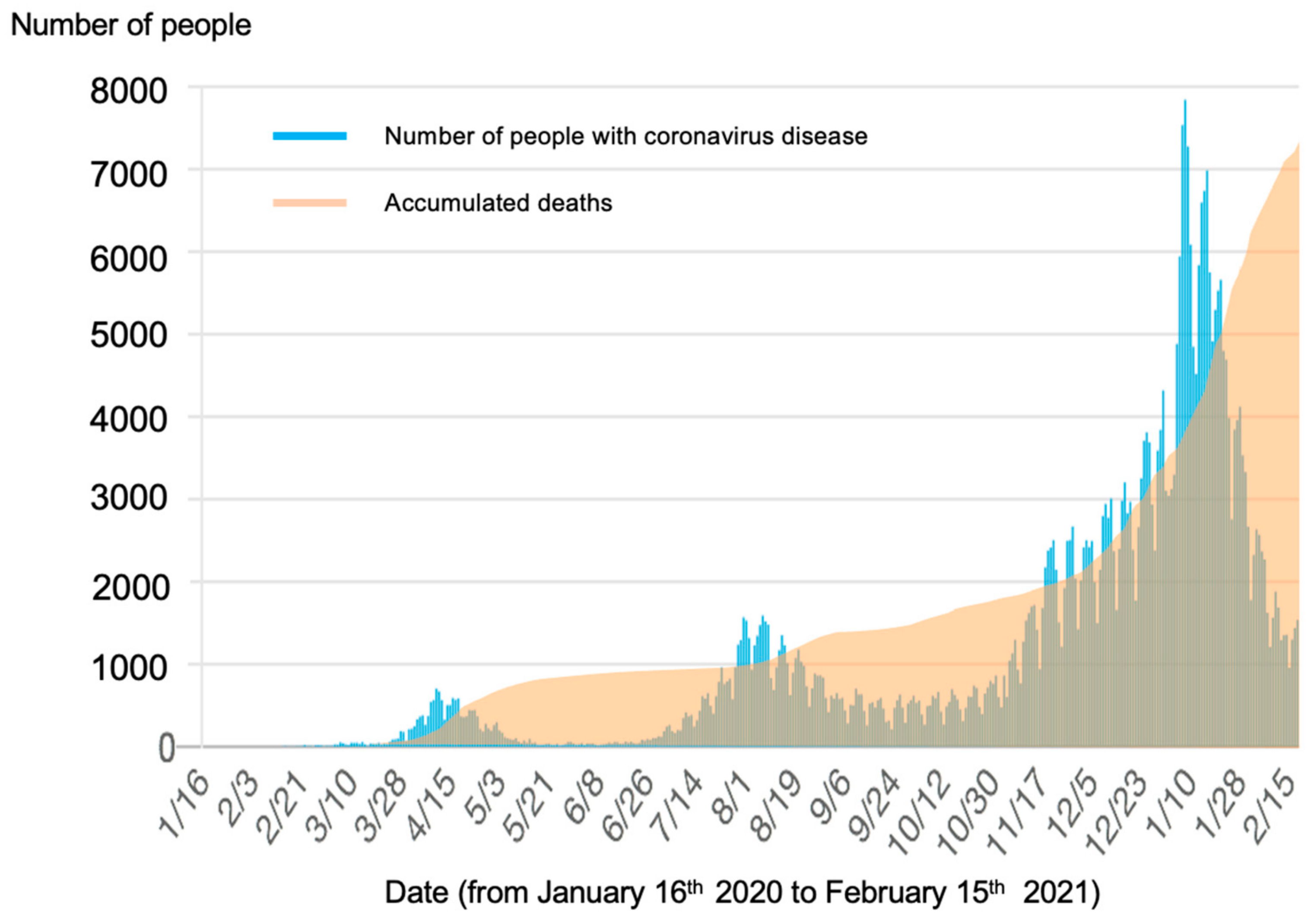 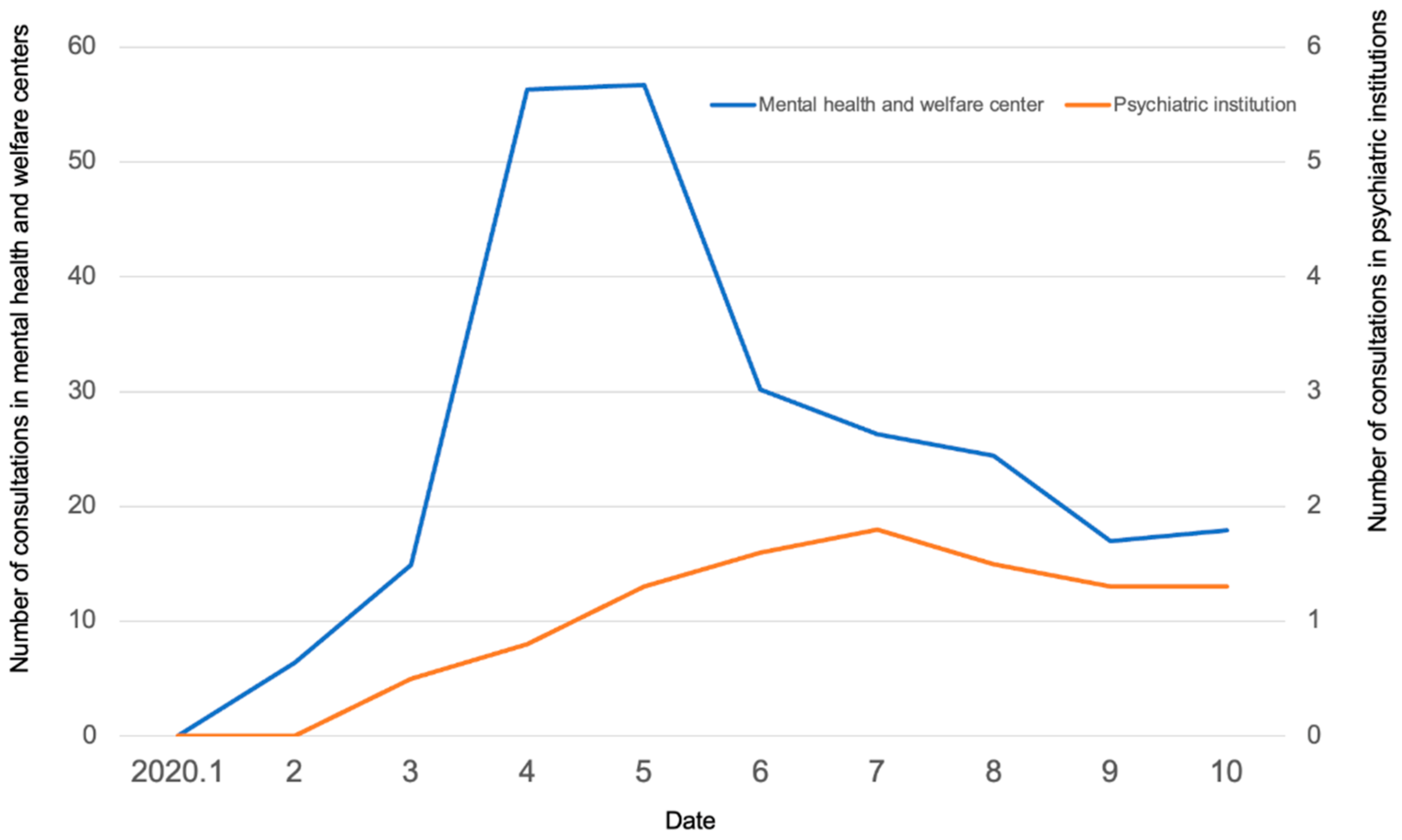 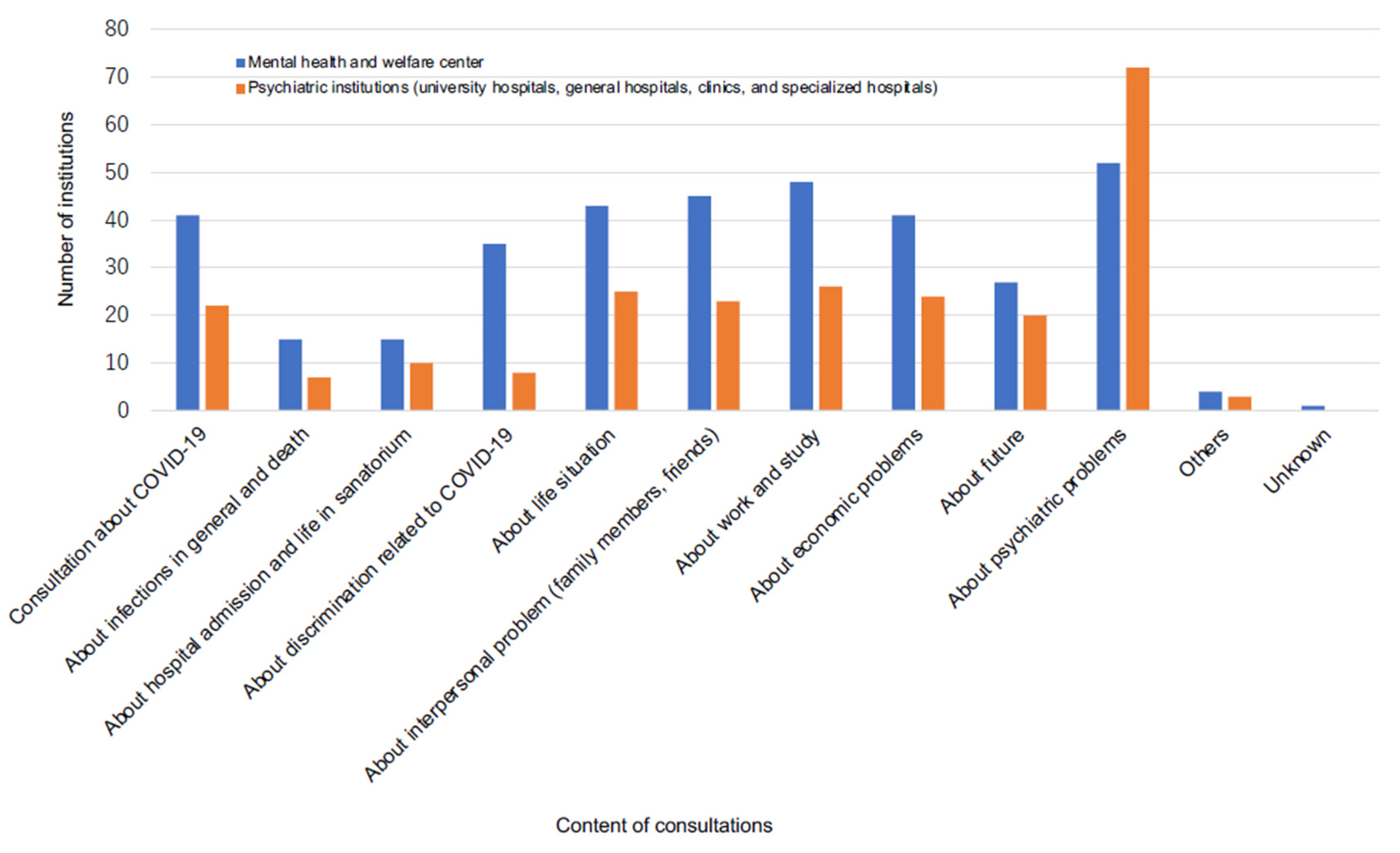 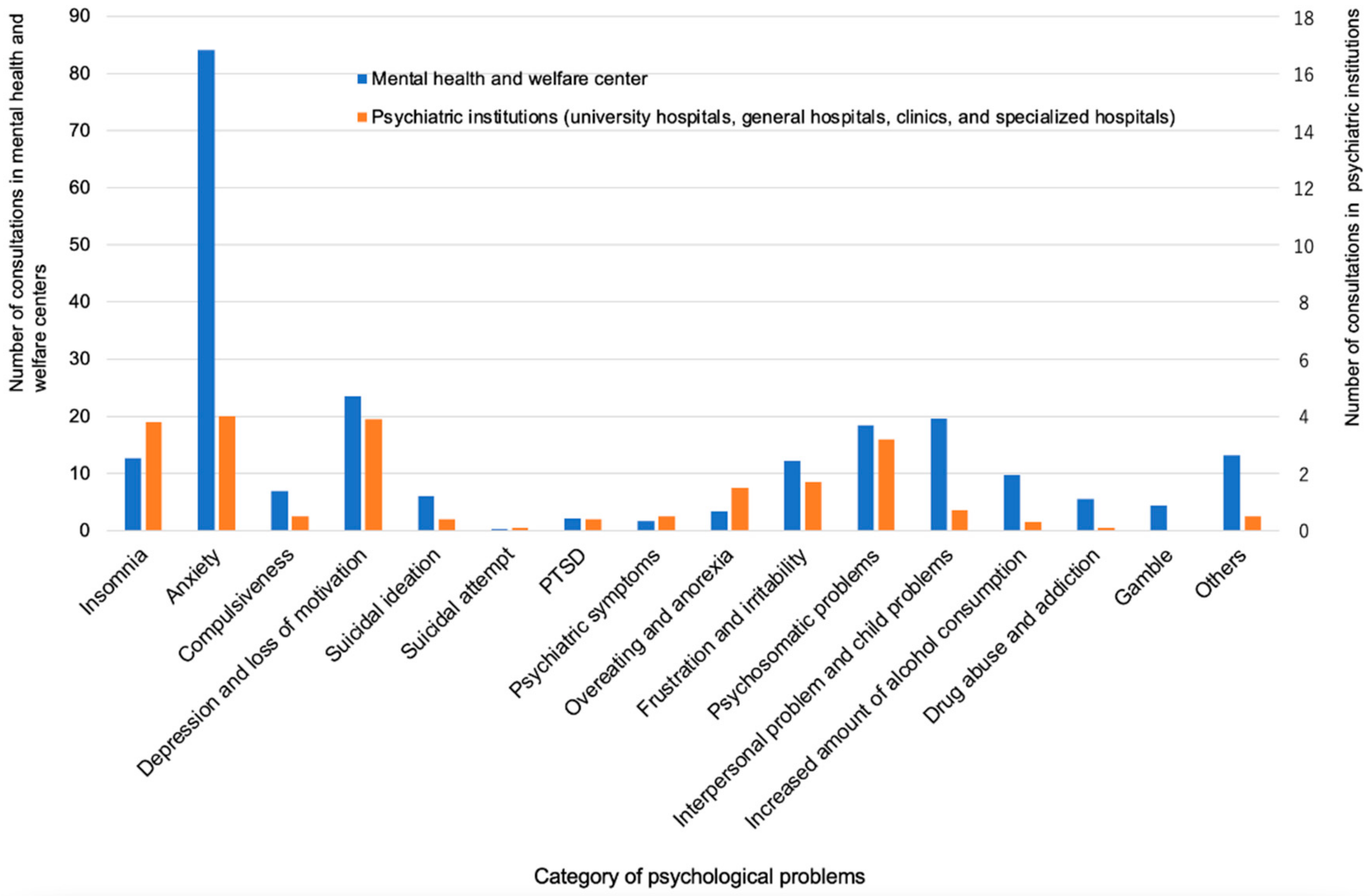 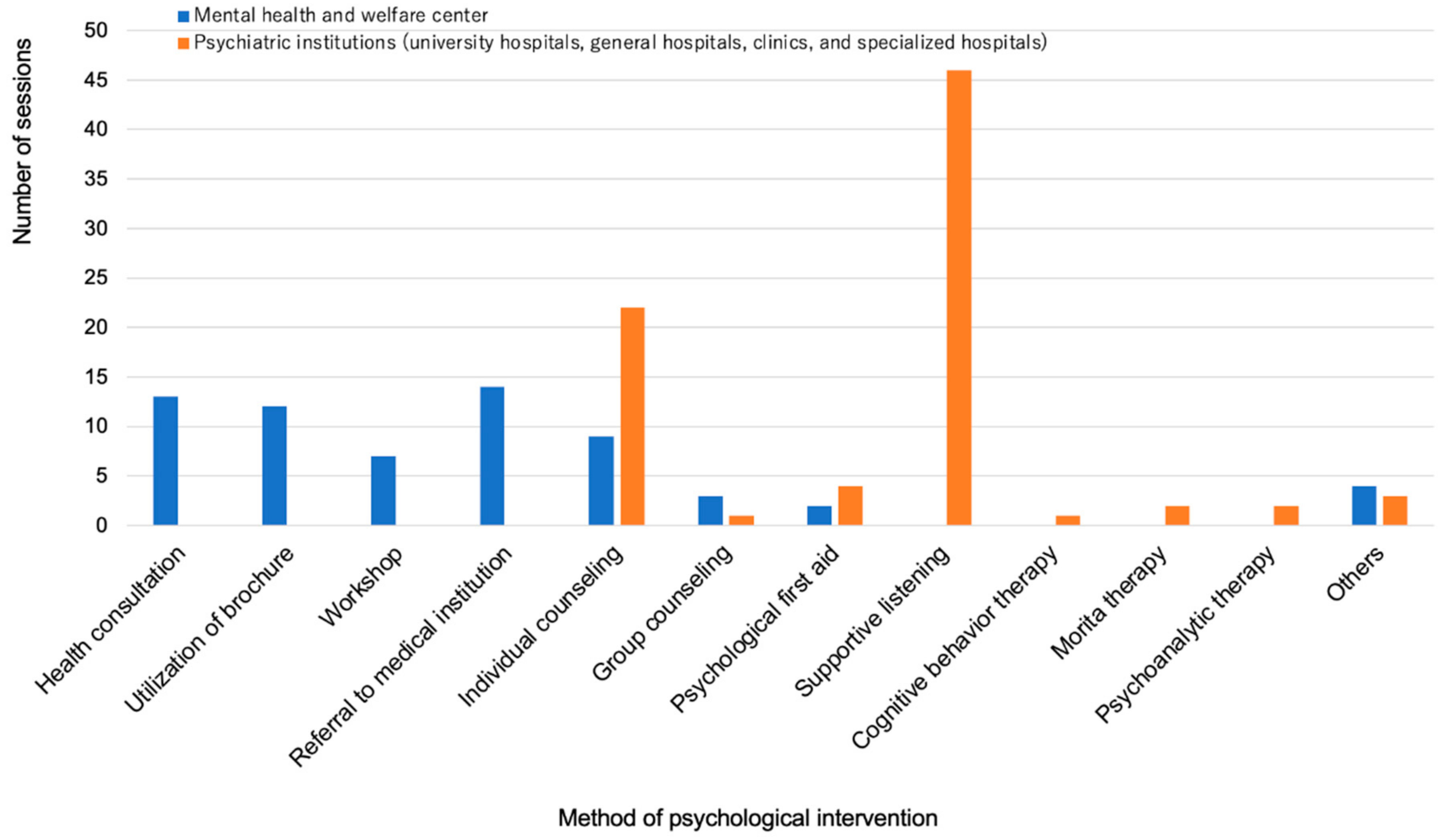