Prevalence and Associated Factors of Self-Reported Gingival Bleeding: A Multicenter Study in France

Few studies have exhaustively assessed relationships among polymorphisms, the microbiome, and periodontitis. The objective of the present study was to assess associations simultaneously among polymorphisms, the microbiome, and periodontitis. We used propensity score matching with a 1:1 ratio to select subjects, and then 22 individuals (mean age ± standard deviation, 60.7 ± 9.9 years) were analyzed. After saliva collection, V3-4 regions of the 16S rRNA gene were sequenced to investigate microbiome composition, alpha diversity (Shannon index, Simpson index, Chao1, and abundance-based coverage estimator) and beta diversity using principal coordinate analysis (PCoA) based on weighted and unweighted UniFrac distances. A total of 51 single-nucleotide polymorphisms (SNPs) related to periodontitis were identified. The frequencies of SNPs were collected from Genome-Wide Association Study data. The PCoA of unweighted UniFrac distance showed a significant difference between periodontitis and control groups (p < 0.05). There were no significant differences in alpha diversity and PCoA of weighted UniFrac distance (p > 0.05). Two families (Lactobacillaceae and Desulfobulbaceae) and one species (Porphyromonas gingivalis) were observed only in the periodontitis group. No SNPs showed significant expression. These results suggest that periodontitis was related to the presence of P. gingivalis and the families Lactobacillaceae and Desulfobulbaceae but not SNPs. View Full-Text
Keywords: periodontitis; microbiota; single-nucleotide polymorphisms periodontitis; microbiota; single-nucleotide polymorphisms
►▼ Show Figures 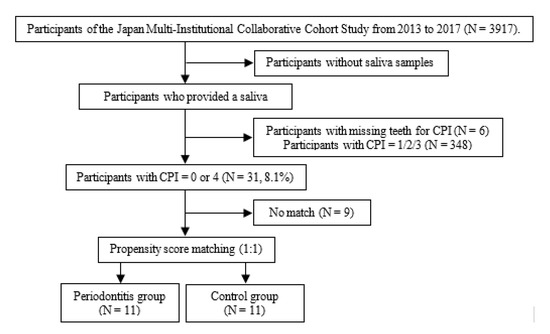