Benefits of Exercise on Influenza or Pneumonia in Older Adults: A Systematic Review
Previous Article in Journal

Incidence of Respiratory Symptoms for Residents Living Near a Petrochemical Industrial Complex: A Meta-Analysis
Previous Article in Special Issue

The fruit of Schisandra chinensis (SC) is a well-known traditional herb used for pharmacological purposes in Asian countries (e.g., Korea, China, and Japan). In animal studies, SC extract supplementation had beneficial effects on muscle strength and lactate level. However, the effect of SC extract supplementation on skeletal muscle strength and lactate at rest in humans remains unclear. The purpose of this study was to evaluate the effect of SC extract supplementation on quadriceps muscle strength (QMS) and lactate at rest in adult women. Forty five healthy post-menopausal middle-aged women (61.9 ± 8.4 years) were randomly divided into the SC (n = 24) or the placebo group (n = 21). The SC group consumed 1000 mg of SC extract per day, whereas the placebo group consumed 1000 mg of starch per day for 12 weeks. The difference in muscle mass, physical function, and biomarkers and the relative changes between baseline and 12 weeks were evaluated. We used two-factor repeated measures analysis of variance (ANOVA) to determine interaction (group × time) effects for variables. Statistical significance was accepted at p < 0.05. In ANOVA results, QMS (p = 0.001) and lactate level (p = 0.038) showed significant interactions. With paired t-tests, QMS was significantly increased (p < 0.001) and lactate level at rest was significantly decreased (p < 0.05) after 12 weeks in the SC group. However, no interactions were found between the other variables. Supplementation of SC extract may help to improve QMS as well as decrease lactate level at rest in adult women. We believe that SC extract is a health supplement that can support healthy life in this population. View Full-Text
Keywords: Schisandra chinensis; muscle strength; resting lactate Schisandra chinensis; muscle strength; resting lactate
►▼ Show Figures 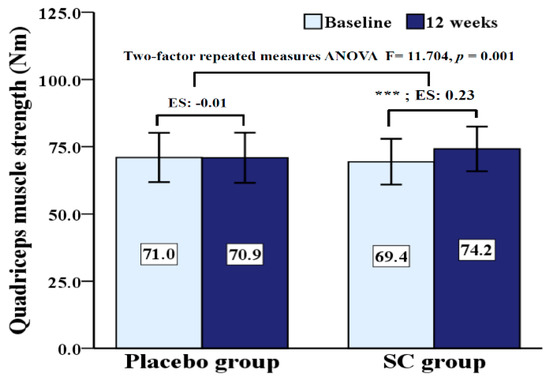