The Impact of a Change in Employment on Three Work-Related Diseases: A Retrospective Longitudinal Study of 10,530 Belgian Employees
Previous Article in Journal

We recruited 74 volunteers (46 were male) who were medical interns at Chang Gung Memorial Hospital in Taiwan from May 2011 to June 2012. One female participant was lost to follow-up due to non-academic leave. Aged from 23 to 29, all participants were healthy without any mental illnesses. They completed a baseline survey 2 months prior to the beginning their internships and were assessed general demographic factors such as age and gender, Tridimensional Personality Questionnaire (TPQ), Phantom Vibration and Ringing Questionnaire, Beck Depression Inventory (BDI), and Beck Anxiety Inventory (BAI) at the following five stages of medical internship: (1) one week prior to the internship, (2) the 3rd month of the internship, (3) the 6th month of the internship, (4) the 12th month of the internship, and (5) two weeks after their internship. During the medical internship (Stages 2, 3, and 4), each participant worked approximately 86.7 h per week, including 33.5 continuous work hours and 10 nights with on-call per month, but did not work on Stages 1 and 5. All participants provided informed written consent and were awarded by 1000 New Taiwan Dollars (around 33 USD) for fully participation. Since the data has been published in previous papers, the ethical review is not required for the secondary analysis of the existing and de-identified data.

2.2.2. The Beck Depression and Anxiety Inventories

BDI and BAI are two commonly-used self-administered instruments for detecting symptoms of depression and anxiety. They are both multiple-choice self-report inventory for measuring the severity of depression and anxiety symptoms. BDI is composed of 21 items rated from 0 to 3. In this version, the scores are interpreted as: 0–13 = normal; 14–19 = mild depression; 20–28 = moderate depression; and 29–63 = severe depression. Similarly, BAI is composed of 21 items and anxiety is scored in the following manner: 0–7 = minimal anxiety; 8–15 = mild anxiety; 16–25 = moderate anxiety; and 26–63 = severe anxiety.

We used a causal mediation analysis to investigate the role of depression and anxiety in the mechanism of working stress during medical internship inducing PVS and PRS. According to previous literatures, it is assumed that PVS, PRS, anxiety and depression are caused by working stress during medical internship [1,2]. It is also assumed that anxiety and depression are the cause of PVS and PRS. The causal relationships among working stress during medical internship, PVS and PRS, and anxiety and depression, as shown in Figure 1. The working stress was examined by the differences of work hours and night shift between Stages 2, 3, 4 (medical internship) and Stages 1, 5 (one week prior to internship, and two weeks after internship). Since depression and anxiety measured by BDI and BAI can be treated as two relative independent variables [7], the pathway mediated by depression and anxiety were assumed to be paralleled. The total effect of the working stress during medical internship on PVS and PRS could be decomposed into three parts: (1) the part involving the change of anxiety score; (2) the part involving the change of depression score; and (3) the part not involving that change of either anxiety or depression score. We can conduct mediation analysis for two times, for each time we treated anxiety or depression as the only one mediator of interest and evaluate the mediated effect and proportion mediated. As a result, mediation analysis was conducted for four times: (1) anxiety as the mediator and PVS as the outcome; (2) depression as the mediator and PVS as the outcome; (3) anxiety as the mediator and PRS as the outcome; and (4) depression as the mediator and PRS as the outcome. For each mediation analysis, we built the following two regression models for an outcome of interest (PVS or PRS) and a mediator of interest (anxiety or depression, respectively): where individual indicator = 1, …, 73, time indicator = 0, 1, 5. is the baseline covariates of each individual , including gender and personality trait. For individual measured at time , the exposure (duty status) is denoted as , the mediator (anxiety or depression score) as , and the outcome (PVS or PRS) as . Generalized linear mixed models with random effect ( and ) for intercept were applied to adjust the autocorrelation among the observations for the same individual with repeated measurements. All analyses were performed by mediation using the mediation. R package (R Core Team, Vienna, Austria), developed by Tingley et al. [8] on R version 3.3.2.

Our findings showed both depression and anxiety can explain a portion of stress-induced PVS and PRS during medical internship. Our study also emphasized the importance of depression by showing that a higher proportion was mediated by depression than anxiety for both PVS and PRS. A dimensional approach to identify the phantom vibrations and ringing associated with anxiety and depression during medical internship might be more appropriate in clinical practice and of more benefit to prevention of work-related burnout. 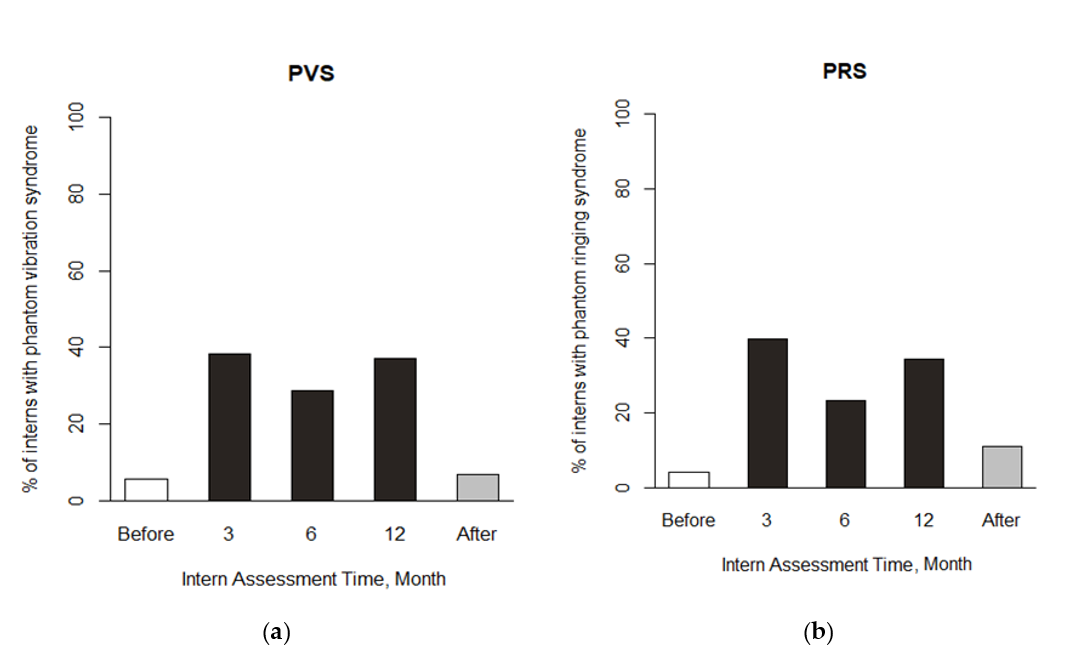 
Lin, Yu-Hsuan, Kuan-I Lin, Yuan-Chien Pan, and Sheng-Hsuan Lin. 2020. "Investigation of the Role of Anxiety and Depression on the Formation of Phantom Vibration and Ringing Syndrome Caused by Working Stress during Medical Internship" International Journal of Environmental Research and Public Health 17, no. 20: 7480. https://doi.org/10.3390/ijerph17207480


Lin, Yu-Hsuan, Kuan-I Lin, Yuan-Chien Pan, and Sheng-Hsuan Lin. 2020. "Investigation of the Role of Anxiety and Depression on the Formation of Phantom Vibration and Ringing Syndrome Caused by Working Stress during Medical Internship" International Journal of Environmental Research and Public Health 17, no. 20: 7480. https://doi.org/10.3390/ijerph17207480