Spatio-Econometric Analysis of Urban Land Use Efficiency in China from the Perspective of Natural Resources Input and Undesirable Outputs: A Case Study of 287 Cities in China
Previous Article in Special Issue

Process, Practice and Progress: A Case Study of the Health Impact Assessment (HIA) of Brexit in Wales

An Assessment of Annual Mortality Attributable to Ambient PM2.5 in Bangkok, Thailand

Multiple studies indicate that PM2.5 is the most deleterious air pollutant for which there are ambient air quality standards. Daily concentrations of PM2.5 in Bangkok, Thailand, continuously exceed the World Health Organization (WHO) and the Thai National Ambient Air Quality Standards (NAAQSs). Bangkok has only recently begun to measure concentrations of PM2.5. To overcome this paucity of data, daily PM2.5/PM10 ratios were generated over the period 2012–2018 to interpolate missing values. Concentration-response coefficients (β values) for PM2.5 versus non-accidental, cardiopulmonary, and lung cancer mortalities were derived from the literature. Values were also estimated and were found to be comparable to those reported in the literature for a Chinese population, but considerably lower than those reported in the literature from the United States. These findings strongly suggest that specific regional β values should be used to accurately quantify the number of premature deaths attributable to PM2.5 in Asian populations. Health burden analysis using the Environmental Benefits Mapping and Analysis Program (BenMAP) showed that PM2.5 concentration in Bangkok contributes to 4240 non-accidental, 1317 cardiopulmonary, and 370 lung cancer mortalities annually. Further analysis showed that the attainment of PM2.5 levels to the NAAQSs and WHO guideline would reduce annual premature mortality in Bangkok by 33%and 75%, respectively. View Full-Text
Keywords: daily PM2.5/PM10 ratios; concentration-response coefficients; health burden; health benefit; Bangkok daily PM2.5/PM10 ratios; concentration-response coefficients; health burden; health benefit; Bangkok
►▼ Show Figures 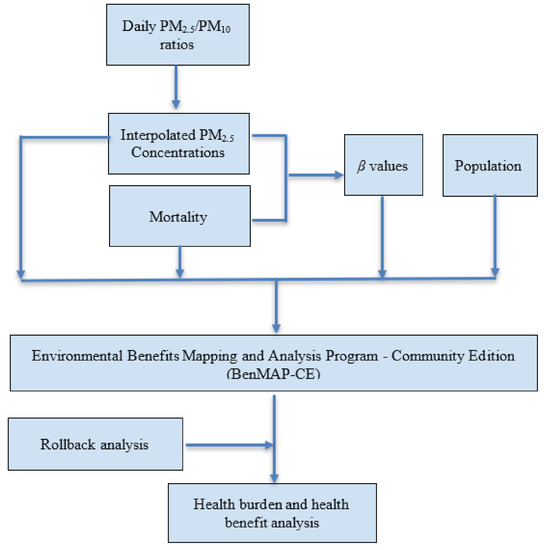