The Conceptual and Methodological Mayhem of “Screen Time”

Reactions to Unsolicited Violent, and Sexual, Explicit Media Content Shared over Social Media: Gender Differences and Links with Prior Exposure

While there has been extensive research into consumption of “traditional” forms of explicit sexual and violent media (within pornography, videogames and movies), the informal exchange and viewing of explicit real-world violent and sexual content via social media is an under-investigated and potentially problematic behaviour. The current study used an online survey (n = 225: 169f, 55m, 1x, mean age 30.61 (SD 12.03)) to explore self-reported reactions to unsolicited explicit violent and sexual content that participants had received from friends or contacts. In line with our predictions based on previous studies of fictional explicit content, we found effects of both gender and prior exposure on these reactions. Specifically, females rated both sexual and violent explicit content as significantly less funny and exciting and more disturbing than males did. Amongst males, those with high previous exposure rated violent content as more exciting than those with lower or no prior experience. Regardless of gender, participants with higher exposure to sexual content rated it as funnier than those with mild or no exposure, and those with higher exposure to violent content rated it as more amusing and more exciting. However, contrary to what desensitization theories would predict, prior exposure did not attenuate how disturbing explicit content (of either a sexual or a violent nature) was rated. Multiple avenues for further investigation emerged from this preliminary cross-sectional study, and we suggest priorities for further qualitative or longitudinal work on this novel topic. View Full-Text
Keywords: explicit content; social media; sexual; violent; unsolicited; cyberpsychology explicit content; social media; sexual; violent; unsolicited; cyberpsychology
►▼ Show Figures 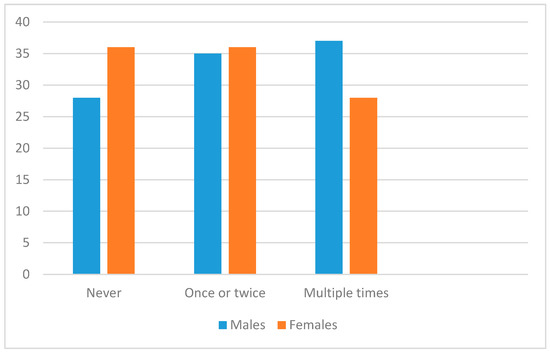