Prepregnancy Endocrine, Autoimmune Disorders and the Risks of Gestational Hypertension-Preeclampsia in Primiparas: A Nationwide Population-Based Study in Taiwan

Developmental dyslexia (DD) is a common neurobehavioral disorder in children. It refers to the phenomenon in which children with normal intelligence lag significantly behind their peers in reading ability. In China, there is no unified standard for the assessment of dyslexia due to the use of simplified and traditional Chinese characters in different regions. This study was aimed at analyzing the reliability and validity of the self-developed Chinese dyslexia assessment tool named Chinese Reading Ability Test (CRAT), which was suitable for students of grade 3 to 5 in primary school. We randomly selected three primary schools in Shantou city of China, including two in the central district and one in the surrounding district. A total of 1492 students of grades 3 through 5 were recruited. We assessed the reliability of CRAT by test–retest reliability and internal consistency. The validity assessment was realized by discriminant validity, content validity and confirmatory factor analysis (CFA). For reliability, the test–retest correlation coefficient of the total score of the CRAT was 0.671. The difference between the test–retest was not statistically significant. The Cronbach’s alpha coefficient of the CRAT was 0.75. For validity, the correlation coefficient between the score of each subscale and the total score of the scale ranged from 0.29 to 0.73. The indexes of the three structural equation models all meet the standard (p > 0.05, χ2/df < 2.00, RMSEA < 0.05, GFI > 0.90, AGFI > 0.90, NFI > 0.90, CFI > 0.90 and IFI > 0.90). The fitting effects of the models were good. The CRAT has sufficient reliability and validity which could be used for the assessment and auxiliary diagnosis of Chinese Dyslexia in primary school students of grade 3 to 5. View Full-Text
Keywords: dyslexia; reliability; validity; confirmatory factor analysis; auxiliary diagnosis dyslexia; reliability; validity; confirmatory factor analysis; auxiliary diagnosis
►▼ Show Figures 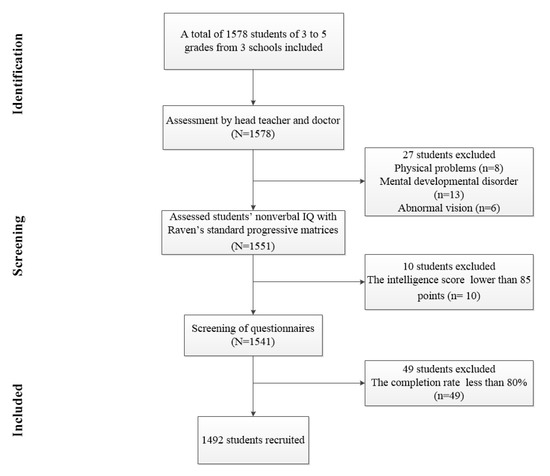