How to Manage Diversity and Enhance Team Performance: Evidence from Online Doctor Teams in China
Previous Article in Special Issue

The Yangtze River Delta (YRD) is one of the most developed regions in China. This is also a flood-prone area where flood disasters are frequently experienced; the situations between the people–land nexus and the people–water nexus are very complicated. Therefore, the accurate assessment of flood risk is of great significance to regional development. The paper took the YRD urban agglomeration as the research case. The driving force, pressure, state, impact and response (DPSIR) conceptual framework was established to analyze the indexes of flood disasters. The random forest (RF) algorithm was used to screen important indexes of floods risk, and a risk assessment model based on the radial basis function (RBF) neural network was constructed to evaluate the flood risk level in this region from 2009 to 2018. The risk map showed the I-V level of flood risk in the YRD urban agglomeration from 2016 to 2018 by using the geographic information system (GIS). Further analysis indicated that the indexes such as flood season rainfall, urban impervious area ratio, gross domestic product (GDP) per square kilometer of land, water area ratio, population density and emergency rescue capacity of public administration departments have important influence on flood risk. The flood risk has been increasing in the YRD urban agglomeration during the past ten years under the urbanization background, and economic development status showed a significant positive correlation with flood risks. In addition, there were serious differences in the rising rate of flood risks and the status quo among provinces. There are still a few cities that have stabilized at a better flood-risk level through urban flood control measures from 2016 to 2018. These results were basically in line with the actual situation, which validated the effectiveness of the model. Finally, countermeasures and suggestions for reducing the urban flood risk in the YRD region were proposed, in order to provide decision support for flood control, disaster reduction and emergency management in the YRD region. View Full-Text
Keywords: urban flood; random forest (RF); RBF neural network; YRD urban agglomeration; regulation countermeasure urban flood; random forest (RF); RBF neural network; YRD urban agglomeration; regulation countermeasure
►▼ Show Figures 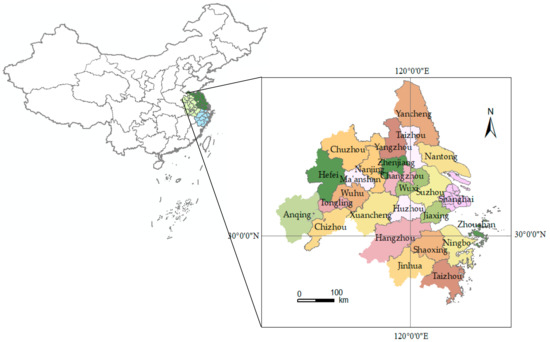