Acute and Chronic Toxicity of Carbamazepine on the Release of Chitobiase, Molting, and Reproduction in Daphnia similis
Previous Article in Journal

This work introduces the potential synergistic toxicity of binary mixtures of pesticides and pharmaceuticals, which have been detected in substantial amounts in major river basins in South Korea. Different dose-response curve functions were employed in each experimental toxicity dataset for Aliivibrio fischeri. We tested the toxicity of 30 binary mixtures at two effect concentrations: high effect concentration [EC50] and low effect concentration (EC10) ranges. Thus, the toxicological interactions were evaluated at 60 effected concentration data points in total and based on model deviation ratios (MDRs) between predicted and observed toxicity values (e.g., three types of combined effects: synergistic (MDR > 2), additive (0.5 ≤ MDR ≤ 2), and antagonistic (MDR < 0.5)). From the 60 data points, MDRs could not be applied to 17 points, since their toxicities could not be measured. The result showed 48%-additive (n = 20), 40%-antagonistic (n = 17), and 12%-synergistic (n = 6) toxicity effects from 43 binaries (excluding the 17 combinations without MDRs). In this study, EC10 ratio mixtures at a low overall effect range showed a general tendency to have more synergistic effects than the EC50 ratio mixtures at a high effect range. We also found an inversion phenomenon, which detected three binaries of the combination of synergism at low concentrations and additive antagonism at high concentrations. View Full-Text
Keywords: mixture toxicity; concentration addition; pesticide; pharmaceuticals; Aliivibrio fischeri mixture toxicity; concentration addition; pesticide; pharmaceuticals; Aliivibrio fischeri
►▼ Show Figures 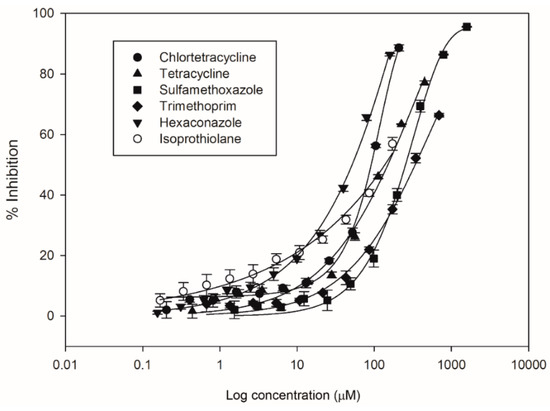