The Problem with Low-Prevalence of Bullying

Poor Dietary Habits in Bullied Adolescents: The Moderating Effects of Diet on Depression

The prevalence of bullying has increased dramatically during recent years, with numerous negative consequences for the health and quality of life of bullied adolescents. Although negative psychological consequences of this type of situation have been widely investigated, no previous research has evaluated the effects of bullying victimization on dietary habits, and its relationship with psychological outcomes, such as depression. For this reason, the main aim of the present study was to evaluate the association between bullying, dietary habits, and depression in a sample of 527 Spanish adolescents. The results obtained showed that being bullied was correlated negatively with healthy dietary habits and positively with depression. Moderation analysis revealed dietary habits as moderator of the association between bullying and depression. These results underline the relevance of diet in the phenomenon of bullying, especially in victims, as could be related to the high levels of depression characteristic of this population. The inclusion of nutritional education in intervention programs oriented to victims of bullying might significantly improve their efficacy, reducing depression levels. View Full-Text
Keywords: bullying; diet; depression; adolescents bullying; diet; depression; adolescents
►▼ Show Figures 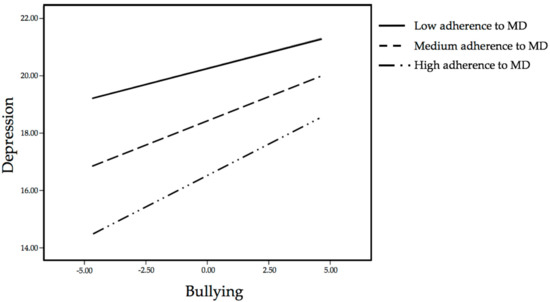