Perspectives on the Measles, Mumps and Rubella Vaccination among Somali Mothers in Stockholm

The exploration of new food sources and natural products is the result of the increase in world population as well as the need for a healthier diet; in this context, microalgae are undoubtedly an interesting solution. With the intent to enhance their value in new commercial applications, this paper aims to characterize microalgae that have already been recognized as safe or authorized as additives for humans and animals (Chlorella vulgaris, Arthrospira platensis, Haematococcus pluvialis, Dunaliella salina) as well as those that have not yet been marketed (Scenedesmus almeriensis and Nannocholoropsis sp.). In this scope, the content of proteins, carbohydrates, lipids, total dietary fiber, humidity, ash, and carotenoids has been measured via standard methods. In addition, individual carotenoids (beta-carotene, astaxanthin, and lutein) as well as individual saturated, monounsaturated, and polyunsaturated fatty acids have been identified and quantified chromatographically. The results confirm the prerogative of some species to produce certain products such as carotenoids, polyunsaturated fatty acids, and proteins, but also show how their cellular content is rich and diverse. H. pluvialis green and red phases, and Nannochloropsis sp., in addition to producing astaxanthin and omega-3, contain about 25–33% w/w proteins on a dry basis. D. salina is rich in beta-carotene (3.45% w/w on a dry basis), S. Almeriensis is a source of lutein (0.30% w/w on a dry basis), and the C. vulgaris species is a protein-based microalgae (45% w/w on a dry basis). All, however, can also produce important fatty acids such as palmitic acid, γ-linolenic acid, and oleic acid. Considering their varied composition, these microalgae can find applications in multiple sectors. This is true for microalgae already on the market as well as for promising new sources of bioproducts such as S. almeriensis and Nannochloropsis sp. View Full-Text
Keywords: market; bio-products; protein; lipids; carotenoids; Arthospira platensis; Scenedesmus almeriensis; Haematococcus pluvialis; Chlorella vulgaris; Dunaliella salina; Nannochloropsis sp. market; bio-products; protein; lipids; carotenoids; Arthospira platensis; Scenedesmus almeriensis; Haematococcus pluvialis; Chlorella vulgaris; Dunaliella salina; Nannochloropsis sp.
►▼ Show Figures 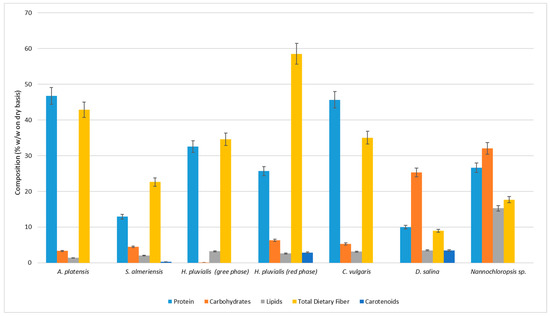