An Assessment of the Food and Nutrition Security Status of Weaned 7–12 Months Old Children in Rural and Peri-Urban Communities of Gauteng and Limpopo Provinces, South Africa

This study assessed the food and nutrition security status of children receiving complementary food in rural and peri-urban communities. A group of 106 mothers from Lebowakgomo village and Hammanskraal Township, respectively, participated in the survey. Additionally, six focus group discussions were conducted per study area to assess the mothers’ perceptions about children’s food access. The Children’s Food Insecurity Access Scale (CFIAS) was used to assess the food security status (access) of the children. The Individual Dietary Diversity Score (IDDS) together with the unquantified food consumption frequency survey were used as a proxy measure of the nutritional quality of the children’s diets. The age and weight of the children obtained from the children’s clinic health cards were used to calculate Weight-for-Age Z scores (WAZ) in order to determine the prevalence of underweight children. The findings showed that a large percentage of children were severely food-insecure, 87% and 78%, in rural and peri-urban areas, respectively. Additionally, Lebowakgomo children (23.6%) and Hammanskraal children (17.9%) were severely underweight. Overall, children’s diets in both study areas was characterized by nutrient-deficient complementary foods. Cheaper foods with a longer stomach-filling effect such as white maize meal and sugar were the most commonly purchased and used. Hence, the children consumed very limited amounts of foods rich in proteins, minerals, and vitamins, which significantly increased the risk of their being malnourished. View Full-Text
Keywords: food access; dietary diversity; child malnutrition; complementary feeding food access; dietary diversity; child malnutrition; complementary feeding
►▼ Show Figures 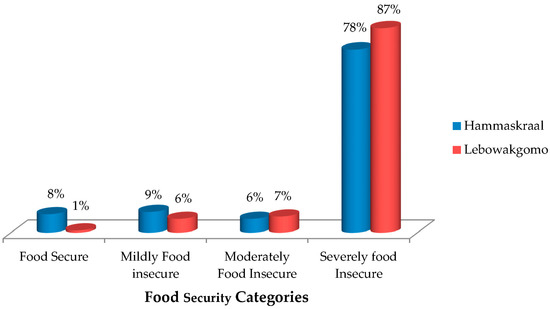