An Assessment of the Food and Nutrition Security Status of Weaned 7–12 Months Old Children in Rural and Peri-Urban Communities of Gauteng and Limpopo Provinces, South Africa
Previous Article in Journal

Public Health Services Utilization and Its Determinants among Internal Migrants in China: Evidence from a Nationally Representative Survey

Companion animals are an important aspect in human life. However, they may also be considered a source of pathogens. An example of zoonotic parasitoses is toxocarosis or cutaneous larva migrans (CLM). The aim of the study was to detect zoonotic nematodes of dogs living in different areas and the intensity of contamination in parasite polluted environments that are hazardous to human health. The fecal samples were examined using standard flotation and decantation methods as well as McMaster’s quantitative technique. The soil samples in urban and rural areas were examined using a modified flotation method as described by Quinn et al. Statistical analyses were performed by IBM SPSS Statistics Version 23. The overall prevalence of parasites in dogs was 38%, 17.02% and 56.60% from urban and rural areas, respectively. The percentage values of nematodes important for human health (Toxocara canis, Ancylostomatidae, Trichuris vulpis) remained at the same level (16%). The infected dogs were dominated by a single parasite species, the main was T. canis (28.95%). In total, 54.30% of the soil samples were contaminated with parasite eggs. The contamination of urban and rural sandpits was 40% and 60%, respectively. The molecular examinations of soil samples using LAMP (loop-mediated isothermal amplification) confirmed the presence of nematode eggs of the species T. canis in all samples previously classified as positive View Full-Text
Keywords: Toxocara canis; Ancylostomatidae; dog; environment; zoonosis; LAMP Toxocara canis; Ancylostomatidae; dog; environment; zoonosis; LAMP
►▼ Show Figures 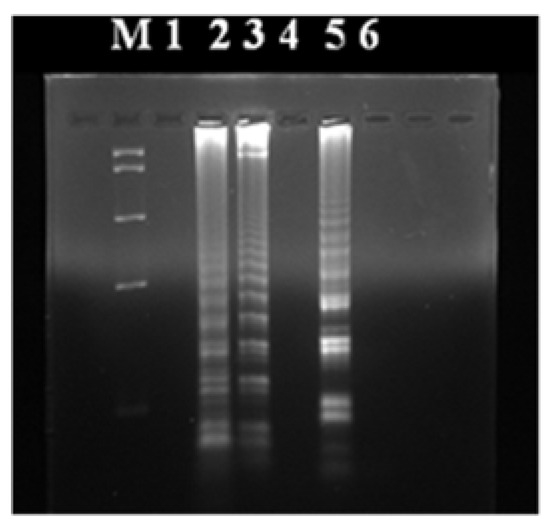