Adherence to Referral Criteria at Admission and Patient Management at a Specialized Burns Centre: The Case of the Red Cross War Memorial Children’s Hospital in Cape Town, South Africa

Referral guidelines for burn care are meant to assist in decision-making as regards patient transfer and admissions to specialized units. Little is known, however, concerning how closely they are followed and whether they are linked to patient care. This is the object of the current study, focused on the paediatric burns centre of the Red Cross War Memorial Children’s Hospital in Cape Town, South Africa. All patients admitted to the centre during the winters of 2011–2015 (n = 1165) were included. The patient files were scrutinized to clarify whether the referral criteria in place were identified (seven in total) and to compile data on patient and injury characteristics. A case was defined as adherent to the criteria when at least one criterion was fulfilled and adherence was expressed as a percentage with 95% confidence intervals, for all years aggregated as well as by year and by patient or injury characteristics. The association between adherence to any individual criterion and hospital care (surgery or longer length of stay) was measured using logistic regressions. The overall adherence was 93.4% (100% among children under 2 years of age and 86% among the others) and it did not vary remarkably over time. The two criteria of “injury sustained at a specific anatomical site” (85.2%) and “young age” (51.9%) were those most often identified. Children aged 2 years or older were more likely to undergo surgery or to stay longer than those of young age (although a referral criterion) and so were those with higher injury severity (a referral criterion). In this specialized paediatric burns centre, children are admitted mainly according to the guidelines. However, given the high prevalence of paediatric burns in the region and the limited resources at the burns centre, adherence to the guidelines need to be further studied at all healthcare levels in the province. View Full-Text
Keywords: triage; referral; paediatrics; resource-poor setting; injury triage; referral; paediatrics; resource-poor setting; injury
►▼ Show Figures 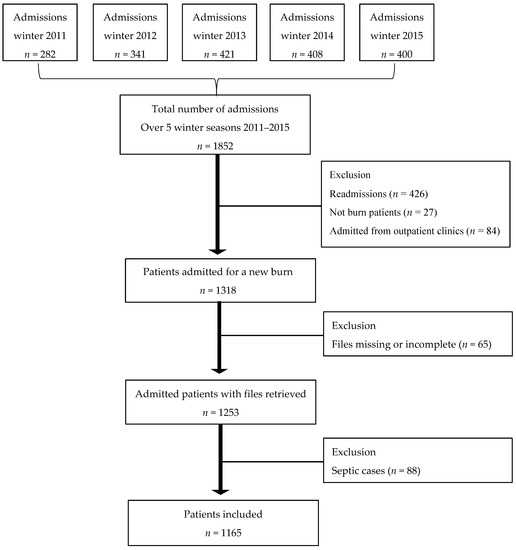