Racial/Ethnic Differences in Electronic Cigarette Use and Reasons for Use among Current and Former Smokers: Findings from a Community-Based Sample

It is well known that certain types of media reports about suicide can result in imitative suicides. In the last two decades, Japan has experienced two suicide epidemics and the subsequent excessive media coverage of these events. However, the quality of the media suicide reports has yet to be evaluated in terms of the guidelines for media suicide coverage. Thus, the present study analyzed Japanese newspaper articles (n = 4007) on suicides by charcoal burning or hydrogen sulfide gas between 11 February 2003 and 13 March 2010. The suicide reports were evaluated in terms of the extent to which they conformed to the suicide reporting guidelines. The mean violation scores were 3.06 (±0.7) for all articles, 3.2 (±0.8) for articles about suicide by charcoal burning, and 2.9 (±0.7) for articles about suicide by hydrogen sulfide (p < 0.001). With the exception of not following several recommendations, newspaper articles about suicide have improved in quality, as defined by the recommendations for media suicide coverage. To prevent imitative suicides based on media suicide reports, individuals in the media should try not to report suicide methods and to make attempts to report the poor condition of suicide survivors. View Full-Text
Keywords: charcoal; hydrogen sulfide; suicide; newspaper article; report; World Health Organization (WHO); guideline charcoal; hydrogen sulfide; suicide; newspaper article; report; World Health Organization (WHO); guideline
►▼ Show Figures 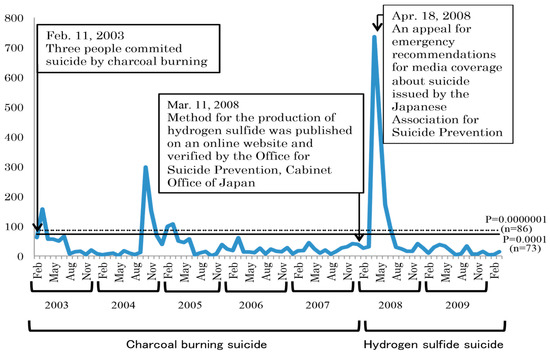