Fauziah A. Alshehri 2 and

Escherichia coli-derived L-asparaginases have been used in the treatment of acute lymphoblastic leukemia (ALL), however, clinical hypersensitivity reactions and silent inactivation due to antibodies against E. coli-asparaginase, lead to inactivation of these preparations in most cases.Therefore, this study was aimed to investigate the cytotoxicity and antitumor effects ofa novel L-asparaginaseenzyme, isolated from Phaseolus vulgaris seeds (P-Asp) on the ALL cell line (Jurkat). The immunogenicity of the enzyme was also evaluated in-vivo and results were compared to commercially available enzymes of microbial sources. The data demonstrated that P-Asp has an enhanced anti-proliferative effect on ALL cells as detected by the WST-8 cell viability assay kit. Cells treated with P-Asp also exhibited a higher degree of early apoptosis compared with asparaginase from Escherichia coli (L-Asp) or its pegylated form Pegasparagas (PEG-ASP) that induced higher rates of late apoptosis and necrosis as detected by an Annexin V/Propidium iodide binding assay. In-vivo experiments indicated that mice treated with P-Asp had less distinct allergenic responses than other bacterial enzyme preparations as indicated by lower serum concentrations of IgG, IgE, IgM and mMCP-1 compared with other treated groups. In conclusion, P-Asp can be considered as a promising candidate for use in the treatment of ALL. View Full-Text
Keywords: asparaginase; acute lymphoplastic leukemia; allergy; Immunogenicity; proliferation; apoptosis; cytotoxicity asparaginase; acute lymphoplastic leukemia; allergy; Immunogenicity; proliferation; apoptosis; cytotoxicity
►▼ Show Figures 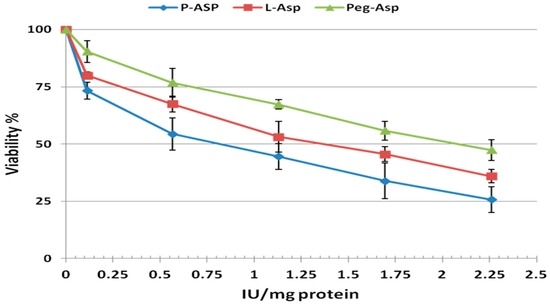