Microbial Oligosaccharides with Biomedical Applications
Next Article in Special Issue

Distribution of the Water-Soluble Astaxanthin Binding Carotenoprotein (AstaP) in Scenedesmaceae

Photooxidative stress-inducible water-soluble astaxanthin-binding proteins, designated as AstaP, were identified in two Scenedesmaceae strains, Coelastrella astaxanthina Ki-4 and Scenedesmus obtusus Oki-4N; both strains were isolated under high light conditions. These AstaPs are classified as a novel family of carotenoprotein and are useful for providing valuable astaxanthin in water-soluble form; however, the distribution of AstaP orthologs in other microalgae remains unknown. Here, we examined the distribution of AstaP orthologs in the family Scenedesmaceae with two model microalgae, Chlamydomonas reinhardtii and Chlorella variabilis. The expression of AstaP orthologs under photooxidative stress conditions was detected in cell extracts of Scenedesmaceae strains, but not in model algal strains. Aqueous orange proteins produced by Scenedesmaceae strains were shown to bind astaxanthin. The protein from Scenedesmus costatus SAG 46.88 was purified. It was named ScosAstaP and found to bind astaxanthin. The deduced amino acid sequence from a gene encoding ScosAstaP showed 62% identity to Ki-4 AstaP. The expression of the genes encoding AstaP orthologs was shown to be inducible under photooxidative stress conditions; however, the production amounts of AstaP orthologs were estimated to be approximately 5 to 10 times lower than that of Ki-4 and Oki-4N. View Full-Text
Keywords: astaxanthin; Scenedesmus; Coelastrella; carotenoprotein; astaxanthin-binding protein astaxanthin; Scenedesmus; Coelastrella; carotenoprotein; astaxanthin-binding protein
►▼ Show Figures 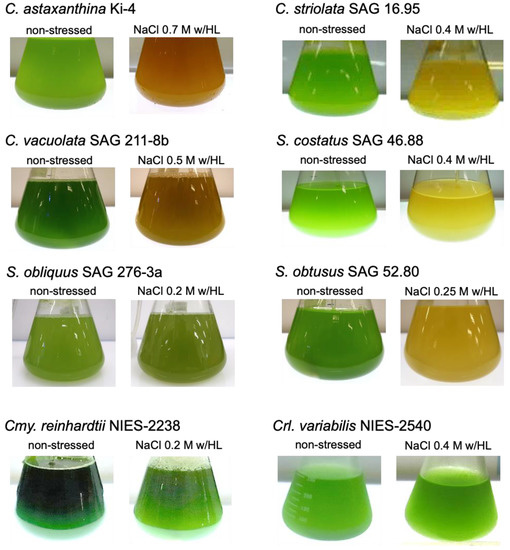