Marine Bacteria versus Microalgae: Who Is the Best for Biotechnological Production of Bioactive Compounds with Antioxidant Properties and Other Biological Applications?
Next Article in Special Issue

Mycosporine-like amino acids (MAAs) have gained considerable attention as highly active photoprotective candidates for human sunscreens. However, more studies are necessary to evaluate the extraction efficiencies of these metabolites in cosmetic compatible solvents, as well as, their subsequent HPLC analysis. In the present study, MAA extraction using distilled water and 20% aqueous methanol in four Rhodophyta was investigated. Different re-dissolution solvents and a C8 and C18 columns were tested for the HPLC analysis. Porphyra-334, shinorine, palythine, palythine-serine, asterina-330, and palythinol were identified by HPLC/ESI-MS. The separation of these MAAs were improved employing the C8-column, and using methanol as re-dissolution solvent. Regarding total MAAs concentrations, no differences between the two solvents were found. The highest MAA amounts were observed injecting them directly in the HPLC. According to these results, distilled water could be an excellent extraction solvent for MAAs. Nevertheless, the re-dissolution in pure methanol after dryness would be the best option for the qualitative analysis of the most common MAAs in these red algae. Our results entail important implications regarding the use of red macroalgae as promising candidates as environment-friendly sources of natural sunscreens. View Full-Text
Keywords: HPLC column; mycosporine-like amino acids; photoprotection; re-dissolution solvent; Rhodophyta HPLC column; mycosporine-like amino acids; photoprotection; re-dissolution solvent; Rhodophyta
►▼ Show Figures 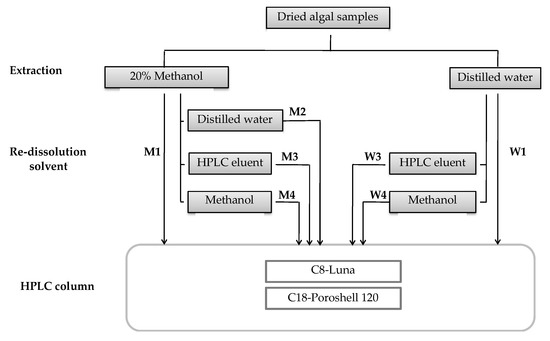