On the Neuroprotective Role of Astaxanthin: New Perspectives?

Astaxanthin is a carotenoid with powerful antioxidant and anti-inflammatory activity produced by several freshwater and marine microorganisms, including bacteria, yeast, fungi, and microalgae. Due to its deep red-orange color it confers a reddish hue to the flesh of salmon, shrimps, lobsters, and crayfish that feed on astaxanthin-producing organisms, which helps protect their immune system and increase their fertility. From the nutritional point of view, astaxanthin is considered one of the strongest antioxidants in nature, due to its high scavenging potential of free radicals in the human body. Recently, astaxanthin is also receiving attention for its effect on the prevention or co-treatment of neurological pathologies, including Alzheimer and Parkinson diseases. In this review, we focus on the neuroprotective properties of astaxanthin and explore the underlying mechanisms to counteract neurological diseases, mainly based on its capability to cross the blood-brain barrier and its oxidative, anti-inflammatory, and anti-apoptotic properties. View Full-Text
Keywords: astaxanthin; neuroinflammation; neuroprotective effect; neuroactive carotenoids; neurodegenerative diseases astaxanthin; neuroinflammation; neuroprotective effect; neuroactive carotenoids; neurodegenerative diseases
►▼ Show Figures 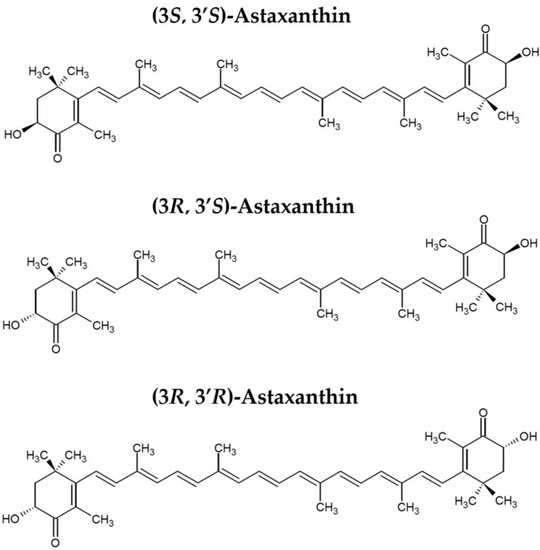