The green alga Caulerpa cylindracea is a non-autochthonous and invasive species that is severely affecting the native communities in the Mediterranean Sea. Recent researches show that the native edible fish Diplodus sargus actively feeds on this alga and cellular and physiological alterations have been related to the novel alimentary habits. The complex effects of such a trophic exposure to the invasive pest are still poorly understood. Here we report on the metabolic profiles of plasma from D. sargus individuals exposed to C. cylindracea along the southern Italian coast, using 1H NMR spectroscopy and multivariate analysis (Principal Component Analysis, PCA, Orthogonal Partial Least Square, PLS, and Orthogonal Partial Least Square Discriminant Analysis, OPLS-DA). Fish were sampled in two seasonal periods from three different locations, each characterized by a different degree of algal abundance. The levels of the algal bisindole alkaloid caulerpin, which is accumulated in the fish tissues, was used as an indicator of the trophic exposure to the seaweed and related to the plasma metabolic profiles. The profiles appeared clearly influenced by the sampling period beside the content of caulerpin, while the analyses also supported a moderate alteration of lipid and choline metabolism related to the Caulerpa-based diet. View Full-Text
Keywords: Caulerpa cylindracea; Diplodus sargus; fish plasma; metabolic status; NMR spectroscopy; multivariate analysis; PCA; OPLS; OPLS-DA Caulerpa cylindracea; Diplodus sargus; fish plasma; metabolic status; NMR spectroscopy; multivariate analysis; PCA; OPLS; OPLS-DA
►▼ Show Figures 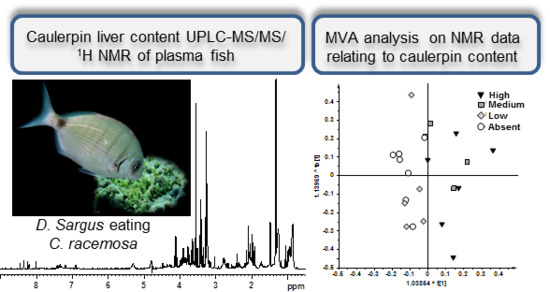