2015: A Transition Year for Pharmaceuticals?

It is well known that plants are important sources for the preparation of natural remedies as they contain many biologically active compounds. In particular, polyphenols, terpenic compounds, organic acids, and vitamins are the most widely occurring groups of phytochemicals. Some endemic species may be used for the production of herbal preparations containing phytochemicals with significant bioactivity, as antioxidant activity and anti-inflammatory capacities, and health benefits. Blackberry sprouts and blackcurrant buds are known to contain appreciable levels of bioactive compounds, including flavonols, phenolic acids, monoterpenes, vitamin C, and catechins, with several clinical effects. The aim of this research was to perform an analytical study of blackcurrant and blackberry bud-preparations, in order to identify and quantify the main biomarkers, obtaining a specific phytochemical fingerprint to evaluate the single botanical class contribution to total phytocomplex and relative bioactivity, using a High Performance Liquid Chromatograph−Diode Array Detector; the same analyses were performed both on the University laboratory and commercial preparations. Different chromatographic methods were used to determine concentrations of biomolecules in the preparations, allowing for quantification of statistically significant differences in their bioactive compound content both in the case of Ribes nigrum and Rubus cultivated varieties at different harvest stages. In blackcurrant bud-extracts the most important class was organic acids (50.98%) followed by monoterpenes (14.05%), while in blackberry preparations the main bioactive classes were catechins (50.06%) and organic acids (27.34%). Chemical, pharmaceutical and agronomic-environmental knowledge could be important for obtaining label certifications for the valorization of specific genotypes, with high clinical and pharmaceutical value: this study allowed to develop an effective tool for the natural preparation quality control and bioactivity evaluation through the chemical fingerprinting of bud preparations. View Full-Text
Keywords: biomarkers; Ribes nigrum; Rubus cultivated varieties; bioactivity; herbal preparations; phytochemical fingerprint; bud-extracts biomarkers; Ribes nigrum; Rubus cultivated varieties; bioactivity; herbal preparations; phytochemical fingerprint; bud-extracts
►▼ Show Figures 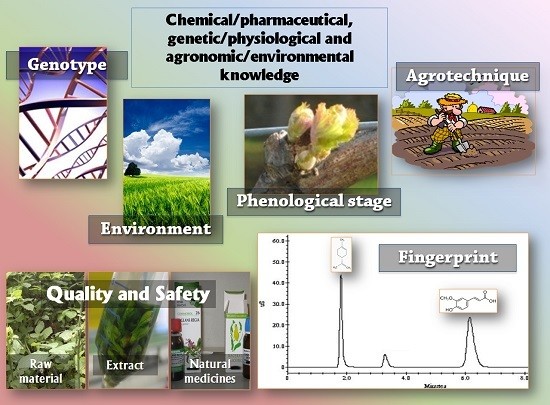